Bundy’s Daughter Goes After Hannity: ‘More Worried About His Ratings’ Than My Dad 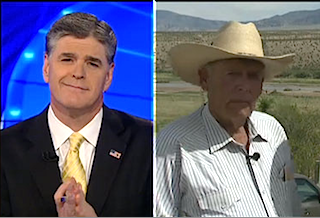 Shiree Bundy Cox, one of Cliven Bundy’s 14 children, took to her public Facebook page Thursday night to defend her father against charges of racism after he opined about “the Negro” being “better off” under slavery. Cox lashed out at media figures, including Sean Hannity and Glenn Beck, who have each distanced themselves from the Nevada rancher since his views on race came out.

“I’m sure most of you have heard the news about my dad being called a racist. Wow! The media loves to take things out of context don’t they? First off I’d just like to say that my dad has never been the most eloquent speaking person. Like someone said, he’s a Moses who needs an Aaron to speak for him. This is true. Second, however, is that the media has turned this into a circus side show. It’s like their trying to throw us off the real subject. Why was this ever even brought up? What does this have to do with land rights issues?”

She then moved on to question Hannity’s loyalty to her family’s cause:

“Sean Hannity was all for reporting the happenings at the Bundy Ranch until this popped up. I wonder if someone hoped it would be that way… By the way, I think Mr. Hannity is more worried about his ratings than he really is about what my dad said. If he supports a supposed racist, what will that do to his ratings? He’s already lost his #1 spot on Fox.”

She also discussed Glenn Beck, who all along was more hesitant about embracing Bundy:

“Glenn Beck was never 100% on board with my dad, but now he has an excuse to distance himself even farther. Could there be people out there who want it that way? Get the un main stream media out of the way from reporting this situation in a positive light and the battle is more than won for the opposing side.”

Finally, Cox pointed to some of Bundy’s few defenders, like InfoWars’ Alex Jones:

“Instead of listening to the very liberal New York Times, please go to The Alex Jones Channel “Cliven Bundy responds to New York Times Racism Report” and look up Kira Davis “I Don’t Care If Cliven Bundy is a Racist”. Both are on you tube.”

Cox emphasized her own belief in equality “regardless of color of hair, skin or eyes,” and ultimately said of her father: “Is my dad a racist. No, I really don’t think so. Could he have said what he means with a little more tact? Sure he could have. But most of all, should it even be an issue right now? Nope.”