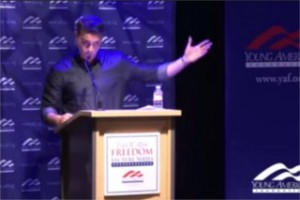 Shapiro had been invited by the CSULA chapter of Young America’s Foundation (YAF) to give a speech entitled “When Diversity Becomes a Problem.” Shapiro is named as one of the plaintiffs along with both the YAF, a national group that describes itself as the “principal outreach organization of the Conservative Movement” to American youth; the CSULA campus chapter of the YAF; and the chapter’s president.

At the time of the event, Shapiro was an editor-at-large for Breitbart News. The ADF, which represents all the plaintiffs, is a Scottsdale, Arizona-based non-profit organization that has litigated against LGBT rights and abortion rights since its founding as the Alliance Defense Fund in 1994. (It changed its name in 2012.)

In February, Shapiro’s speech was met with pre-emptive protest from faculty members and students who vowed to shut down the event. “There were a number of emails and social media posts that caused concern for the campus community,” CSULA President William Covino, who is named as one of the defendants, said in a statement shortly before the event took place. After mounting complaints and threats of protest, the university requested that the YAF chapter cough up $621.50 to pay for additional security, which the group refused to do, arguing that being asked to pay extra simply for organizing a “controversial” event was a violation of its rights. The group had already paid for the use of the venue and for the required amount of security, in accordance with university rules.

Covino moved to postpone the event, saying in an email to the YAF: “After careful consideration, I have decided that it will be best for our campus community if we reschedule Ben Shapiro’s appearance for a later date, so that we can arrange for him to appear as part of a group of speakers with differing viewpoints on diversity. Such an event will better represent our university’s dedication to the free exchange of ideas and the value of considering multiple viewpoints.”

At the time, Shapiro responded by saying, “The campus fascists have taken over,” and referring to the protesters as “jackbooted intellectual weaklings.” He added: “For CSULA to pretend that they’re trying to provide balance isn’t just stupid, it’s insultingly stupid. I am the balance, and they’re too afraid to let me speak. These aren’t diversity warriors. They’re jackbooted thugs. If they want to call the men with guns to shut down free speech, they’ll demonstrate clearly just who they are.”

The YAF and Shapiro made it clear that they were not going to reschedule, and the YAF chapter said in a statement that they were “prepared to take legal action if the school fails to recognize these students’ rights.” Covino allowed the event to proceed as scheduled, though the event’s organizers encountered resistance in the form of students (some of whom camped out in sleeping bags the night prior, according to the complaint) obstructing the venue as part of an organized mass protest.

The complaint alleges that University police officers were present but “did not take any action to stop the protestors from blocking access to the Free Speech Event or to otherwise assist interested individuals in gaining access to the event.” (Throughout the complaint the event, in which Shapiro delivered the address “When Diversity Becomes a Problem,” is referred to as the “Free Speech Event.”) Plaintiffs’ attorneys allege that police did nothing to remove the protesters blocking the event at the instruction of Covino and his Vice-President of Student Life.

ADF attorneys write that protesters succeeded in delaying the event 10-15 minutes and preventing some 100 people who wished to attend from entering the venue. Once Shapiro began speaking, someone pulled the fire alarm. (“Folks, if you’re just joining the live-stream now, someone just pulled the fire alarm because this is how the fascists do it,” Shapiro quipped to the camera.) As a result of the protesters’ blockade, Shapiro and the event’s attendees were forced to remain in the theater for 15 to 20 minutes following the conclusion of the speech. The complaint notes that this was a fire code violation.

In addition to University President Covino, the complaint names as defendants four administrators and three faculty members. The administrators are accused with neglecting to protect the rights of their students and failing to properly enforce university policies, while the faculty defendants are alleged to have taken a more active role in the efforts to shut down the YAF event.

Among the faculty members named as defendants is an assistant professor in the school’s sociology department who allegedly accosted one YAF member as she was putting up flyers for the event and “made multiple posts on YAF’s Facebook page in which he called YAF supporters ‘white supremacists’ and compared them to Hitler,” according to the complaint. The same assistant professor posted a message to his office door approximately one week before the event, reading, “The best response to micro-aggression is macroaggression.”

The ADF attorneys argue that in hindering the event, defendants violated the YAF and Shapiro’s First Amendment rights to Freedom of Speech. Administrators’ “actions and failure to act violated Plaintiff Shapiro’s freedom of speech because Shapiro was forced to speak to a half-full theater and was unable to convey his message to all of the intended audience,” the ADF attorneys write.

A second cause of action alleges that, by attempting to charge the YAF an additional $621.50 in fees because of the event’s “controversial” nature and by treating protesters differently from the event’s organizers and attendees, university administrators violated the group’s right to Equal Protection under the Fourteenth Amendment. They also argue that by blockading Shapiro and attendees inside the theater for 15 to 20 minutes, they falsely imprisoned them.

“When public universities discriminate against points of view they don’t like, they violate both the First Amendment and a core purpose behind their own existence. This type of viewpoint discrimination cannot and will not stand,” ADF Senior Counsel Tyson Langhofer said in a statement.

Reached by phone Thursday night, a spokesperson for CSULA said that the university did not immediately have any comment.