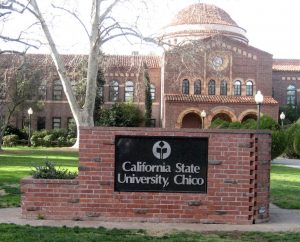 If you thought liberal college campuses couldn’t get any sicker in their obsession to squash free speech and prop up political correctness, think again. GOONS at California State University-Chico have officially declared the English language offensive.

Saying “man up,” “like a girl,” or “coward” are considered prohibited phrases on campus… ‘cuz they marginalize people. No boys and girls, I’m not making this up.

In an effort to be more inclusive — I mean, to coddle these snowflakes — I mean, young adults, the Chico State Advisory Athletic Committee developed the “You Don’t Say” campaign. Student athletes are featured in a series of posters with words or phrases they shouldn’t say and the reason why.

Let’s pause for a moment here and chew on this idea that a college campus in the United States of America is denying students their fundamental right to free speech in the Constitution. Remember, college campuses are supposed to be incubators of intellectual curiosity and promulgate free thought even in its most offensive forms.

One poster features a white male student golfer with this message:

“I don’t say the N-WORD because demeaning someone based on their ethnicity is unacceptable.”

True the N-word is nasty and unacceptable, but is Chico State going to ban students from listening to Hip-Hop music that makes prolific use of the word ‘nigger’ in songs? I find that music offensive when I hear it blaring from a car driving next to me but there’s nothing I can do about it.

There’s a poster of two female student golfers admonishing onlookers about the use of the word ‘gay,’ which has other meanings besides ‘homosexual,’ by the way.

“We don’t say THAT’S GAY because being gay shouldn’t be thought of as a negative connotation.”

A poster of a female student cross-country runner reads:

“I don’t say YOU’RE A PUSSY because a part of a woman’s body should never be used as a connotation for weakness.”

Let me get this straight (no double-entendre intended), an institution of higher learning is adopting the vernacular slur ‘pussy,’ in referring to female reproductive anatomy. What would the biology professor have to say about that? Further, I think the presidential election has roundly covered the use of the word pussy in our lexicon.

There’s more: a pair of student baseball players with painful looks on their faces appears in a poster with this warning:

“We don’t say JUST KILL ME because suicide is not a joking matter and never will be.”

This is ridiculous on its face, and I see no need to flesh out the argument.

There’s another student golfer who appears in a poster with this message:

“I won’t say SPAZ due to my cousin’s disabilities he cannot control.”

And the posters go on and on…featuring off-limit words such as ‘rape,’ ‘retarded,’ ‘nigga,’ ‘nigger,’ ‘shemale,’ and ‘whore.’ But what if a prostitute with learning disabilities is sexually assaulted…never mind.

“Sticks and stones may break my bones but words will never hurt me,” is the adage used by grown-ups to help kids learn to cope with bullying.

Maybe the Language Police at Chico State should put this phrase on posters, instead of trying to silence free speech on campus, like the communist nations of China, Russia or North Korea. (I shudder to think about what happens when these aforementioned snowflakes are forced to face adversity outside the campus bubble…in the real world.)

Words certainly can hurt people’s feelings, but in America we don’t imprison or kill people for exercising their first amendment rights — however ugly.

“People are going to slip up. They’re going to say something they don’t mean to say–maybe even the word that is on their poster,” said Kroll Haley Kroll, Chico State Student-Athlete Advisory Committee (SAAC) co-President.

What would Kroll have the campus police do if students “slip up” and use a prohibited word on campus? Would Kroll want the campus police to take down students like the Chinese military did to students in Tiananmen Square? Or perhaps Kroll would be comfortable calling in the National Guard to shoot down student language violators like they did in 1970, when they shot students protesting against the Vietnam War on Kent State University’s campus.

Even more disturbing and creepy Big Brotherish, Kroll added that she hoped this censorship campaign “will cause people to think before they speak and be aware of the type of inclusive language they should be using.”

This is America where every citizen, including college students, have the right to say, write and think what they damn well please. The growing trend of silencing free speech creeping over college campuses should have all of us alarmed. When school administrators find Halloween costumes, the play the Vagina Monologues, and the English language itself too offensive for college students, maybe we should ban colleges all together because pretty soon, students won’t be learning anything.