Calm Down. The Onion Is Not About to Become a Clinton Propaganda Machine
Opinion

Calm Down. The Onion Is Not About to Become a Clinton Propaganda Machine 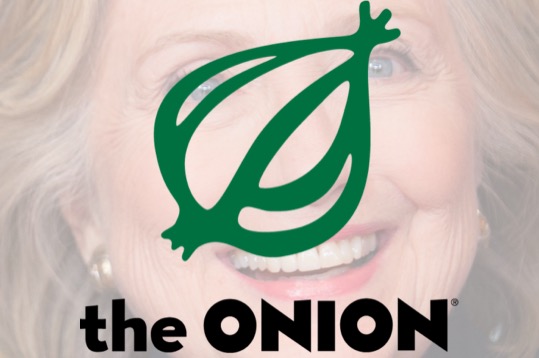 This is a story of two headlines.

The first, published on Tuesday, February 16, came from the farcical digital publication The Onion, and signaled yet another faux-news story wonderfully steeped in satire:

Female Presidential Candidate Who Was United States Senator, Secretary Of State Told To Be More Inspiring

That candidate of course is Hillary Clinton, and the intended parody behind the piece argues that it is ridiculous for such an accomplished woman to have to prove herself further. After all, this is a woman “who overcame entrenched societal biases to build a successful legal career, became the first female senator elected in the state of New York, oversaw the Department of State during a period of widespread international tumult, and, if elected, would be the first female president in American history,” it reads. It’s a tongue-in-cheek take that fans of The Onion have grown to love.

The second headline — published two days later on The Free Thought Project, a left-wing blog devoted to “foster[ing] the creation and expansion of liberty minded solutions to modern day tyrannical oppression” — sought to spoil all the fun:

The smoking gun here is the fact that America’s Finest News Source recently fell under controlling interest of Univision Communications, whose co-owner and chairman, Haim Saban, is a longtime Clinton supporter and heavy financial backer of her and her husband’s efforts.

And Saban’s connection to Clinton is not limited to some small, flimsy donations. The Intercept reported last month that Saban has personally given $2,046,600 to Clinton campaigns, on top of an estimated ten million dollars in donations to the Clinton Foundation.

In 2002, Saban gave five million dollars alone to Bill Clinton’s Presidential Library according to this 2010 profile in The New Yorker. The Saban Center has co-sponsored events that have featured prominent Hillary Clinton speeches, and the friendship between Saban and Bill Clinton is so intimate that it even included one encounter featuring the President in his boxers. Shortly before President Clinton’s impeachment in 1998, Saban hosted a fundraiser for the Democratic National Committee, raising a million and a half dollars. (Throwing down in support of the president, Saban told diners that Kenneth Starr “should be tried for treason!”)

Oh, and the Clinton Foundation? It has a ten-person Board of Directors; one of those people is President Bill Clinton, one is Chelsea Clinton, and one is Dr. Cheryl Saban, the wife of Univision executive chairman — you guessed it — Haim Saban.

This all begs the question: Just how objectively can a Saban-owned publication — even a skewer plate of laughs like The Onion — cover the Democratic frontrunner in an election year?

Even in the world of comedic parody, there would appear to be a level of journalistic integrity that media publications should hold themselves accountable to. Following the sale last month, neither The Onion nor its editorial board issued any statement regarding the ways in which the sale and the Saban-dynamic might affect content that covers Clinton. Certainly the pro-Hillary angle to Tuesday’s lead story — which as of Friday afternoon still appeared on The Onion’s homepage — raised questions as to whether or not the Saban relationship with Clinton influenced the content of its editors.

When Jon Stewart helmed The Daily Show, it took on two simultaneous identities that would seem to run counter to one another. On the one hand, the TV vet Stewart was a formidable, trusted, and highly respected presence in the media-political landscape. He interviewed the President of the United States, and in 2010 hosted a political rally with a crowd of over 215,000 in Washington D.C. The influence and gravitas of Stewart’s brand in politics was unmistakable, with many even calling for him to moderate a presidential debate.

On the other hand, when cornered on his supposed journalistic bias, Stewart would often defend himself by claiming he was simply a comedian, a satiric entity not to be taken too seriously. This was the tack he took when he memorably schooled Tucker Carlson on CNN’s Crossfire, saying, “You’re on CNN. The show that leads into me is puppets making crank phone calls.”

The Onion could similarly claim that its outsider role as establishment-busting jester frees itself from the journalistic binds of corporate ownership transparency, but readers should not be so easily fooled.

But the fact is, it’s highly unlikely that The Onion is about to become a mill for pro-Clinton propaganda. For one thing, as Daily Banter pointed out, there has been a reliably consistent output of anti-Clinton and pro-Bernie articles since the Univision takeover. For another thing, if The Onion were to become the latest mouthpiece for the Clinton agenda, there’s little chance that anyone on the paper’s staff would write it.

Multiple current and former Onion contributors told Mediaite that they found it extremely implausible that the editorial staff would would ever be instructed to write content that was shilling for a political candidate, and even less likely that writers would go along with it.

The business element of The Onion will occasionally make suggestions about content in order to satisfy an advertising arrangement, or to keep from alienating them; similarly, the management has been known to exert influence to avoid offending readers. But in both cases, it’s just that — influence, which entails a process of negotiation. Corporate seems to know better than to act unilaterally. Multiple contributors pointed to the 2013 incident when the Onion higher-ups made the unprecedented decision to break the fourth wall and apologize for a joke that called Oscar-nominated actress Quvenzhané Wallis a “c**t.” (She was nine years old at the time.) It was such a rare and seismic event that it still resonates with Onion writers; former staffers speaking under anonymity told Mediaite that they considered it a breach of their domain, one writer emphatically telling us, “I was livid.”

Moreover, even if such a mandate came down from on high, the writers would most likely balk at the request, or find a way to sneak into the article the fact that they had been compelled to write it — not unlike the way they weave a winking awareness into their native advertising (see: “Sponsored Content Pretty Fucking Awesome.”)

The writers also noted that the piece in question was pretty tame (“run-of-the-mill” and “business as usual” were among the verdicts tossed around), and if it is propaganda, it’s not very good propaganda. As satire, it makes a simple, not terribly acerbic point — that Clinton’s myriad accomplishments have tended to get overshadowed by the fact that many people simply don’t like her. As a piece of agitprop, it’s much too toothless, and is unlikely to sway a single voter, since all it does is recite the already well-rehearsed main points of Clinton’s resume. On those points, you’re either sold or you’re not before you ever start reading.

A consensus among former writers for the Onion paper (as opposed to video content) was that there was “no way in hell” Saban could coax the writers into publishing pro-Hillary content. “They’re smart enough to know that once the Onion starts doing stuff like that, it will suck,” one contributor said.

Onion writers are passionate about the integrity of the editorial process that prizes the development of the best jokes above all. Many credit the quality of the comedy to this autonomy, which rests on the strict separation of satirical and business interests. That’s one reason The Onion spun off its advertorial content into a separate department, and why the Quvenzhané Wallis episode still feels to many like a violation. It seems unlikely Univision would risk damaging their new acquisition so soon after taking over.

It’s possible to operate as a satirical cog in a multinational corporate machine, of course — The Daily Show and Last Week Tonight aren’t exactly housed by mom-and-pop operations. Still, if the rumblings about this latest Clinton piece are any indication, the new ownership has clearly created an optics problem that The Onion has not had to deal with before. As the long shadow of Saban looms over The Onion, what assurances can the publication give to its readers (and writers) that it will maintain its integrity? Maybe Onion articles will begin spoiling the mood by inserting conflict-of-interest disclosures into otherwise outrageous tales of “area men.” Maybe a whole lot of anti-Hillary articles are in order. The Onion did not return multiple requests for comment.

Time will tell the degree to which The Onion chooses to put Hillary Clinton on blast with the same well deserved mockery we see on late night shows. But as more people learn about the long history between Haim Saban and the Clinton political machine, they will hopefully also turn and hold the feet of a trusted comedic force to the fire. Comedic or not, the readership and influence of The Onion is undeniable, and it deserves better than a potential quid-pro-quo safety net built to protect the chummy relationship between the Democratic frontrunner and the site’s top dog.