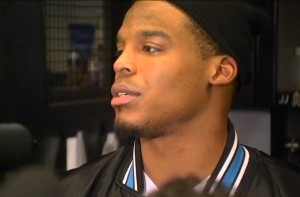 Cam Newton found himself on the bench when the Carolina Panthers offense took the field on Sunday night against the Seattle Seahawks. The reason why was totally unclear until NBC’s Michelle Tafoya broke the news during the Sunday Night Football broadcast. Newton, according to Panthers coach Ron Rivera, had committed a “dress code violation.”

“I didn’t follow dress code, and coach told me that I wasn’t going to start,” Newton said in the postgame news conference. “I stand by his decision.”

Rivera, according to ESPN, added that he made a decision to treat Newton, “like I do all the other players on the team, and he didn’t start.”

The problem, it turned out, was that Newton was not wearing a tie prior to the game — which is mandated by Rivera. The Panthers played a game on the west coast last week in Oakland, and stayed out west for the entire week, and Newton said that he wasn’t properly packed. (NFL teams usually return home after each game.)

“I felt as if I wore a similar outfit like this before, and nothing was done,” Newton said. “But he has rules in place and we have to abide by them. No person is greater than the next person. It is what it is.”

The wardrobe malfunction cost the Panthers, who were throttled by Seattle 40-7. Backup quarterback Derek Anderson threw just one pass filling in for Newton as the starter Sunday night. It was intercepted.