Can Utah Thank Antonin Scalia for Helping to Overturn Its Gay Marriage Ban? 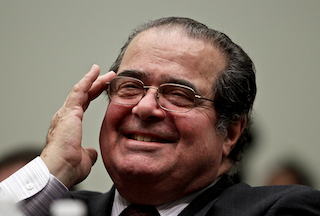 When Supreme Court Justice Antonin Scalia delivered his fiery dissent in the case that deemed the Defense of Marriage Act unconstitutional (United States v. Windsor), he warned that the ruling could lead to individual states overturning bans on same-sex marriage. Today, Scalia’s prediction came true in the state of Utah.

U.S. District Judge Robert J. Shelby issued his ruling Friday, which deems a 2004 law passed by Utah voters to be unconstitutional for its infringement of the 14th amendment rights of gays and lesbians in that state.

Shelby went so far as to quote Scalia’s dissent in his 53-page ruling as justification for his decision to overturn the Utah law:

In his dissenting opinion, the Honorable Antonin Scalia recognized that this result was the logical outcome of the Court’s ruling in Windsor:

“In my opinion, however, the view that this Court will take of state prohibition of same-sex marriage is indicated beyond mistaking by today’s opinion. As I have said, the real rationale of today’s opinion . . . is that DOMA is motivated by “bare . . . desire to harm” couples in same-sex marriages. How easy it is, indeed how inevitable, to reach the same conclusion with regard to state laws denying same- sex couples marital status.”

The court agrees with Justice Scalia’s interpretation of Windsor and finds that the important federalism concerns at issue here are nevertheless insufficient to save a state-law prohibition that denies the Plaintiffs their rights to due process and equal protection under the law.

This is not the first time one of Scalia’s ominous predictions contained within his dissenting opinions have become reality. In the 2003 case Lawrence v. Texas Scalia warned against the ramifications of legalizing sodomy:

In both cases, Justice Scalia was aware that the tides were shifting towards a world in which it would be legally more difficult to deny rights to same-sex couples. In both cases, he used what he thought was hyperbole to instill fear about this dangerous new future of equality. Unfortunately for Scalia, his predictions keep coming true.