Can You Be Anti-Suffrage Without Being Anti-Woman?

Can You Be Anti-Suffrage Without Being Anti-Woman? 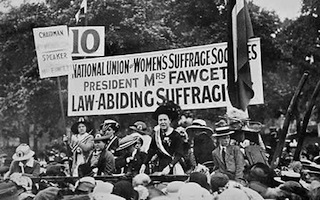 The following is an excerpt from a column written by my great grandfather, Sir Jonathan Westwicke Bershad III, published in July of 1919 in the pages of The Daily Weekly, a modestly popular news journal of the time.

Out on the streets of our fair city as well as in the pages of this very paper, an ugly question has began popping its head out with alarming regularity. That question is, of course, “Can one be anti-women’s suffrage without being anti-woman?” Well, ladies and gentlemen,* I would like to put that question to bed, so to speak. For you see, I think it is very clear that one can!

First off, let me state plainly that I have no problem with women. Some of my best birth mothers are women. However, despite this debate being all about women, it is not, actually, at all about women. What it is about is free speech and tradition!

Men have always voted. That is just the way it is. That is the way it is written in that noblest of documents, the United States Constitution. And, sure, the Constitution was written in an entirely different time and includes many inaccuracies that we have since discarded (again, my apologies to the negroes), this is one point that we should remain firm upon.

And yet, there are still some women as well as some men (whom I fear must actually be women wearing modern imitation mustache devices) who would have us grant this very manly duty upon the weaker sex. To those poor misguided souls, I would offer…a compromise! Would someone who is anti-woman do that? Of course not!

As we all know, when discussing whether to give an oppressed population the rights currently held by everyone else, it only makes sense to do so by letting those in power make up compromises. It only makes sense! And I have a doozy!

First part of the compromise, women will not be allowed to vote.

Now, dear reader, I know what you’re saying. You’re saying, “That doesn’t sound like a compromise. You’ve already gotten everything you wanted.” But, dear simpleton, allow me to finish.

Women will not be allowed to vote. They will, however, be allowed to “note.” Do you see what I did there? A “note” is a parchment of paper which a woman would be allowed to write the name of a candidate of her choosing upon. Now, this note will be different than a vote in many key ways, primarily in that it doesn’t count legally. However, women will still be allowed to feel the pride of stepping into a voting booth by themselves and writing on stuff.

Oh, wait. Actually, they won’t go in by themselves. Women get much too frightened when alone to allow that. We’ll have them go in with a chaperone.

Now, yes, the Suffragists did not get everything they wanted, but I think we can all agree that this is the best way for America! After all, it allows me to feel like I’ve done something. And isn’t that the most important step?

So, there we have it. Problem solved and now no one can call me a sexist. Because I am not a sexist. I haven’t been one since I heard that being a sexist wasn’t cool anymore.

…are we still sure that’s the case? Because, frankly, I’m really pissed off about that.

*You may have noticed that I began this missive by addressing both gentlemen and ladies. As explanation, it has come to the attention of the editorial staff that some females have been reading our paper. We welcome this. However, these women should be aware that common scientific theory holds that the feminine mind only has room for up to three news stories per day. Any more and the woman is in danger of getting the vapors. Ladies, if this column is the third story you read today, please now discard of the paper safely by handing it to either the nearest husband or police officer.