Brought To You By The Letter X? Sesame Street’s YouTube Channel Hacked 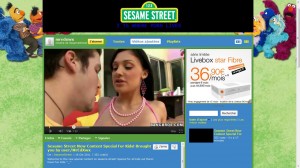 The channel’s profile was also changed, and a message from the would-be perpetrators introduced a new mission statement to 123 Sesame Street:

A short while after the page was taken down, MREDXWX, a gamer who posts walk-throughs and game cheats on his YouTube channel, posted an 18-second video proclaiming his innocence:

The good news for fans of the show, however, is that while the channel itself is down, a search for individual videos turns up most of the classics by user “SesameStreet.” Clicking on the name says that the channel has been deleted, but most of the videos remain. It’s not clear just yet when the official channel will return, but, for the immeditate future, it looks like parents and fans will just have to do manual searches for the videos they want to see until the dust settles: