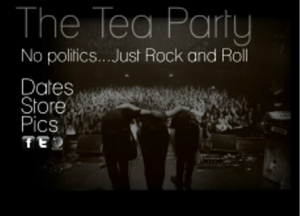 When they first registered the domain in 1993, they didn’t mean it like that. “Tea Party was a euphemism the Beat poets used for getting high and writing poetry and vibing with each other,” says Tea Party — the “Moroccan roll” band, not the political party — bassist Stuart Chatwood. The band split six years ago, but has recently seen an uptick in web traffic — and not necessarily from fans. They’ve added the disclaimer to their homepage that reads, “No Politics … Just Rock and Roll,” but are worried that sharing a name with the other Tea Party has done “so much damage to [their] name. And so Bloomberg Businessweek‘s Joshua Green reports: to the highest bidder, they are ready to sell.

The fishing should be good with the GOP primaries on the horizon. “If you look at the money being talked about this time around — campaigns raising $1 billion — it’s easy to expect teaparty.com to go for well over $1 million,” suspects GoDaddy.com President Warren Adelman. The domain name will soon be as valuable as it likely ever will, and the band will have to decide what to do.

According to Green, TeaParty.com is valuable real estate:

The site has a lot to offer: It appears high in Google’s rankings even though it is rarely updated. It’s the obvious destination for direct-navigation traffic—typing a URL directly into a browser’s address field—believed to constitute as much as 15 percent of all Net traffic. The site has what those in the industry call great “mindshare.”

Tea Party have fielded desirable offers from all the usual suspects: candidates, conservative PACs, an unnamed wealthy Tea Party backer, and even a Democratic group in hunt of a decoy. The decision won’t be so easy, though:

‘We’ve considered lending the name to Stephen Colbert or Jon Stewart to have them dispel some of the stuff that the Tea Party says,’ says Chatwood. ‘As Canadians we’re somewhat sensitive to all the criticism of socialized medicine.’ An ideal outcome, he suggests, would be for George Soros or Arianna Huffington to swoop in with a strong offer. But it seems likelier that the top bidders will be looking to develop an invaluable fundraising portal for a Republican candidate or political group. Nothing has been ruled out. ‘We’ve got families,’ Chatwood says