Cannibal Cop’s Conviction Overturned by Judge; Is That a Good Thing?

Cannibal Cop’s Conviction Overturned by Judge; Is That a Good Thing? 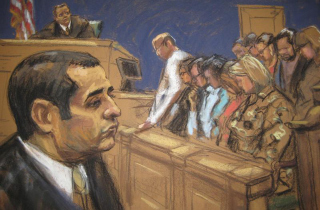 It’s not every day that you find yourself sympathizing with a corrupt cop, never mind one of the aspirational cannibal variety. And while I can’t say that I’m exactly heartened by the news that Gilberto Valle, the New York City police officer who was convicted in 2013 of conspiracy to kidnap, murder, and eat a series of women, won’t be spending the rest of his life in prison, there are some mitigating factors that observers worried about “thought crimes” will take note of.

Last night a federal judge overturned Valle’s prior conviction for the kidnapping charges, the New York Times reports, because he never actually went through with them, and may not have even explicitly intended to.

“The evidentiary record is such that it is more likely than not the case that all of Valle’s Internet communications about kidnapping are fantasy role-play,” Judge Paul G. Gardephe wrote in his opinion.

Valle’s lawyers had argued that simply expressing the desire to do something online, no matter how heinous, should not result in such a harsh sentence. People have “the right to fantasize about whatever and whomever they like, free from government interference,” they said.

(Unless that fantasy is about employer-subsidized birth control apparently).

The prosecution said that Valle very much intended to go through with his plans, which he discussed in online forums, and that he had even gone so far as to stalk and gather information on his intended victims. The judge wasn’t persuaded, however,that it was proved beyond a reasonable doubt that he had entered into an actual conspiracy. “Despite the highly disturbing nature of Valle’s deviant and depraved sexual interests, his chats and emails about these interests are not sufficient — standing alone — to make out the elements of conspiracy to commit kidnapping,” he said.

“I find something troubling about the whole world’s failure to recognize that just because someone has a desire doesn’t mean they do it,” Park Dietz, a forensic psychiatrist who examined Valle explained to New York Magazine in a lengthy look at the thin line between intent and fantasy last year.

They usually are, aren’t they? But as odious as Valle’s fantasies are, it’s still a good sign that you can’t be thrown in prison for the rest of your life for simply expressing them.