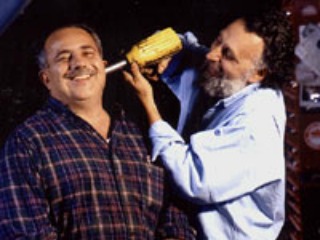 NPR’s “Car Talk’ — the call-in radio show devoted to helping people around the country determine just what that weird “whooshing” sound means — will cease recording new episodes this fall. [Ed. note: This is pretty much the worse news my dad could ever get, not including his daughter’s announcement that she’s going into “blogging.” And just before Father’s Day, at that.]

Hosts Tom Magliozzi and Ray Magliozzi, better known as “Click and Clack,” are set to retire, but their best episodes will be re-broadcast for listeners to enjoy (and maybe even learn from).

“My brother has always been ‘work-averse,’ ” says Ray, 63. “Now, apparently, even the one hour a week is killing him!”

The brothers have been taping Car Talk at WBUR in Boston for 35 years, and the show has been a staple on NPR Member stations for the last 25 years. With older brother Tom turning 75 this year, the guys decided it was time to “stop and smell the cappuccino.”

And here’s what the brothers had to say on their own blog:

RAY: But to our fans, don’t be sad. We’ve managed to avoid getting thrown off NPR for 25 years, given out tens of thousands of wrong answers, generated lawsuit threats from innumerable car companies, and had a hell of a lot of fun talking to you guys.

TOM: And when we listen to the stuff that’s in our archives, it still makes us laugh. A lot. We’re hoping to be like “I Love Lucy” and air ten times a day on “NPR at Nite” in 2075.

RAY: Will we change our minds and come back and do some more shows? I would say it’s unlikely, but anything’s possible. Right, Tommy?

TOM: Absolutely not. My brother can go chase himself. I’m done.

The two continue to write their twice-weekly “Dear Tom and Ray” column, as well as maintain a presence on the web.