Carrie Fisher Suffered a Heart Attack on a Plane (UPDATED) 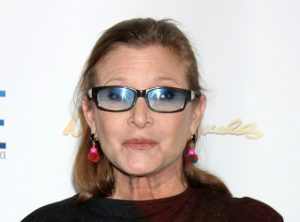 Carrie Fisher suffered a massive heart attack while on a plane Friday, according to a report from TMZ. She was on a plane from London to LAX when it happened, and people on board administered CPR.

According to The Mirror, actress Anna Akana was also on the flight, and Tweeted about the scary incident, saying that both a doctor and a nurse were on the flight and helped out:

Don’t know how else to process this but Carrie Fisher stopped breathing on the flight home. Hope she’s gonna be OK ?

So many thanks to the United flight crew who jumped into action, and the awesome doctor and nurse passengers who helped

Comedian Brad Gage was also there, and he also Tweeted about it and said he “[hopes] she is ok.” Akana responded to one of his Tweets saying she “wasn’t breathing for 10 minutes or so.”

I’m in complete shock. @AnnaAkana and I sat in front of Carrie Fisher on our flight from London and she was just taken off the plane by EMTs

I’m in complete shock. @AnnaAkana and I sat in front of Carrie Fisher on our flight from London and she was just taken off the plane by EMTs

This is a breaking story and we will continue to update our post accordingly.

UPDATE –– 5:56 PM EST: According to TMZ, paramedics did CPR for 15 minutes before they were able to get a pulse. She is now on a ventilator at UCLA medical center.

Carrie is in stable condition.If there is a change,we will share it. For all her fans & friends. I thank you for your prayers & good wishes. pic.twitter.com/isXJqqFEB6