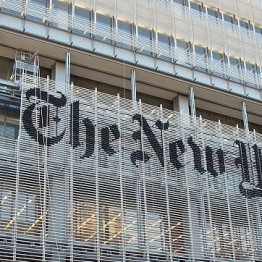 Did the new media world do Catherine Mathis in? The long-time, “soft-spoken” NYT Co. PR chief resigned yesterday to take up a post at the ratings agency Standards & Poor’s. Should this come as a surprise, or is Mathis just an early casualty of this new media world? It’s no secret the Times has been suffering a barrage of bad press this year, mostly to do with its finances. Said Times Co. CEO Janet Robinson in her memo announcing the departure: “[Mathis] has served as the chief communications strategist and spokesperson through some of the most challenging chapters in our history.”

[Mathis] comforted the staff by saying that she had gone on a “charm offensive” with members of the press, according to a person present. She said she had reached out to Michael Wolff; she said that trying to combat the Post’s negative coverage wasn’t worth the candle; and she said that after much wrangling, she even got a correction from The Observer.

We reached out to the relentlessly over-the-top Times critic Michael Wolff to get an idea of what the charm offensive looked like.

Snap! It’s a new PR world out there, particularly when dealing with the blogosphere. It’s one that requires equal parts transparency, and individual attention, and an understanding of how communication online works; namely you have to get in there (something NYT social media editor Jen Preston seems to slowly be getting the hang of lately). “Dutifully posted” letters to editor, while nice fodder for blogs, don’t generally cut it any more. Noted PR giant Ken Sunshine in the same NYO piece: “The Gray Lady needs to adapt to a drastically changed media environment…They’re doing some of it probably grudgingly, and they need to do more of it and to get a little more street sense.”

So maybe Mathis wasn’t interested in the hassle, and who could blame her. It’s not easy to drastically change your practices after 12 years in the same job, especially after years of working for the top dog. That said, with the kind of press the ratings agencies have been getting of late, one wonders if she hasn’t just exited the frying pan into the fire. In the meantime, perhaps the Times should consider hiring someone from the Fox PR dept — they have no qualms about getting down and dirty.