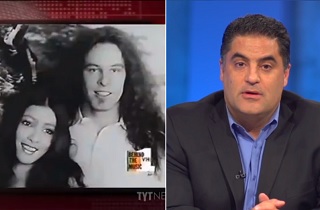 Although Ted Nugent has offered something he calls an apology for calling President Obama a “sub-human mongrel,” that doesn’t mean his career as political liability to Texas Attorney General and GOP gubernatorial candidate Greg Abbott is over.

Aside from Nugent’s other unclaimed Nazi rhetoric baggage, The Young Turks host Cenk Uygur points out that the aging rocker’s documented past defending his right to keep and bare teenagers makes him a bad campaigner for a supposed “family values” candidate.

Using clips from a 1998 VH1 documentary on Nugent, Uygur details the bizarre manifestation of the musician’s “addiction to girls,” including his 1978 legal guardianship of 17 year-old Pele Massa, whom Nugent was not legally allowed to marry due to her age. Nugent called his penchant for younger girls “beautiful” and, according to the doc, “admitted to a number of liaisons with underaged girls.”

“I got the stamp of approval from their parents,” Nugent said in the documentary. “I guess they figured better Ted Nugent than some drug-infested punk in high school.”

“Isn’t that amazing? He became her legal guardian in order to have sex with her,” Uygur said. “And Greg Abbott, Mr. Family Values, Republican candidate for governor in Texas, proudly puts his arm around this guy.”

Uygur went on to slam Nugent for hunting pigs from a helicopter, exclaiming, “Ted Nugent is a pussy. I’m not kidding, I can’t stop saying it, because he literally pooped in his pants to get out of Vietnam.”

He chalked Republican infatuation with Nugent up to a desperation for celebrity attention. “They consider this pant-pooper a celebrity,” he said, adding, “They’re like, ‘Oh my God, we’ve got a celebrity on our side. You wanna have sex with my daughter? Go ahead! Go for it, Ted! You’re the man!'”

For good measure, Cenk played a clip from a 2012 CBS interview in which Nugent laid out the conditions under which he would suck the interviewer’s “dick.”

Now that Nugent has set a precedent by trying to deal with the baggage he brings to the campaign trail, it will be interesting to see if the media continues to rummage through it.