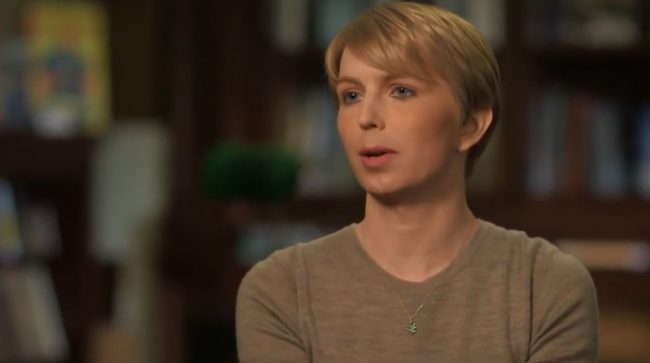 Chelsea Manning was “safe” Monday morning after posting and deleting two tweets which raised concerns that she was contemplating suicide.

“[Chelsea] is safe,” a tweet posted on her profile read. “[She] is on the phone with friends, thanks everyone for your concern and please give her some space”.

** chelsea is safe. she is on the phone with friends, thanks everyone for your concern and please give her some space

That came after the former soldier and whistleblower, who is now running for Senate in Maryland as a Democrat, tweeted an alarming message accompanied by a photo of what appeared to be her standing on the ledge of a high rise building.

“I’m sorry – I tried – I’m sorry I let you all down,” Manning wrote. “Im not really cut out for this world – I tried adapting to this world out here but I failed you – I couldn’t do this anymore – I can take people I don’t know hating me but not my own friends,” she added. “I tried and I’m sorry about my failure.”

Chelsea Manning tweeted this photo what appeared to be an attempted suicide. The image was removed and now the Chelsea Manning twitter account says “Chelsea is safe. She is on the phone with friends, thanks everyone for your co CERN and please give her some space”. pic.twitter.com/XqIMF5Y1dq 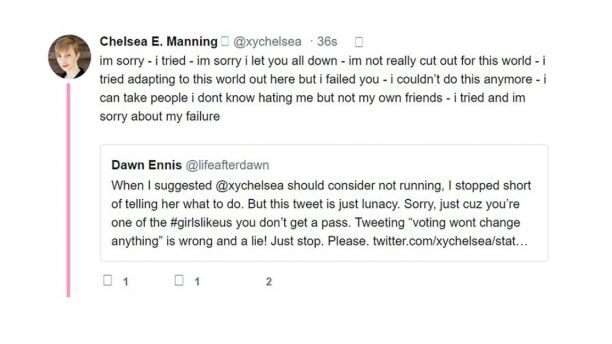 The tweets were deleted less than an hour later, and replaced with the message noting she was “safe.”

Manning is challenging Sen. Ben Cardin, a Maryland Democrat. The whistleblower’s 35-year sentence was commuted by President Barack Obama in 2017.