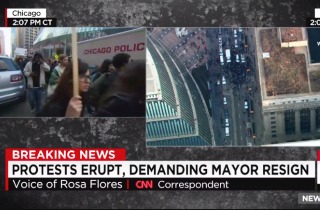 Protesters have gathered on the streets of Chicago to demand that Mayor Rahm Emanuel resign over recent incidents of police brutality that have gripped the entire city and the nation.

The first thing to get people focused on police brutality was video released of the 2014 fatal shooting of Laquan McDonald by a police officer. Then the Chicago PD released video of another fatal shooting, this one of Ronald Johnson, also last year.

These protests today appear to have been triggered by Emanuel’s comments about the McDonald video and how it was withheld for over a year.

Emanuel today issued an apology, saying, “If we’re going to fix it, I want you to understand it’s my responsibility with you. But if we’re also going to begin the healing process, the first step in that journey is my step, and I’m sorry.”

He assured that he’s doing all he can to address people’s concerns about police brutality. Last week he fired police chief Garry McCarthy.

The protest also comes on the heels of yet another controversy about an as-of-yet unreleased video of yet another police shooting, this time of Cedrick LaMont Chatman. A judge will rule in a few weeks on whether the video should be released.

You can watch a live stream of the protests here, via NBC Chicago:

And you can see images from the protests below:

Thousands of protesters marching through the streets near Chicago's City Hall https://t.co/fbo6BpBj00 pic.twitter.com/Tkmedx7BMq

"We go from pain, to protest, to power!" pic.twitter.com/mgV0sN9ib9

Stopped outside Macy's on State and Washington. Police form line in front of entrance. pic.twitter.com/YDpRRNMkDj

.@Chicago_Police did not allow protesters inside of city hall. It appears protesters are headed toward Michigan Ave. pic.twitter.com/exr6KWfsUt