Chris Brown Feuds with The Real Hosts, Calls One a ‘Trout Mouth’

Chris Brown got in a bit of a strange feud this week with the hosts of The Real after the talk show got around to the subject of Brown’s relationship and whether Karrueche Tran should be dating him.

Host Adrienne Bailon said that Tran’s friends aren’t saying anything to her about her relationship with Brown for selfish reasons; they want to “reap the benefits” from that relationship. Here’s the video of those remarks: 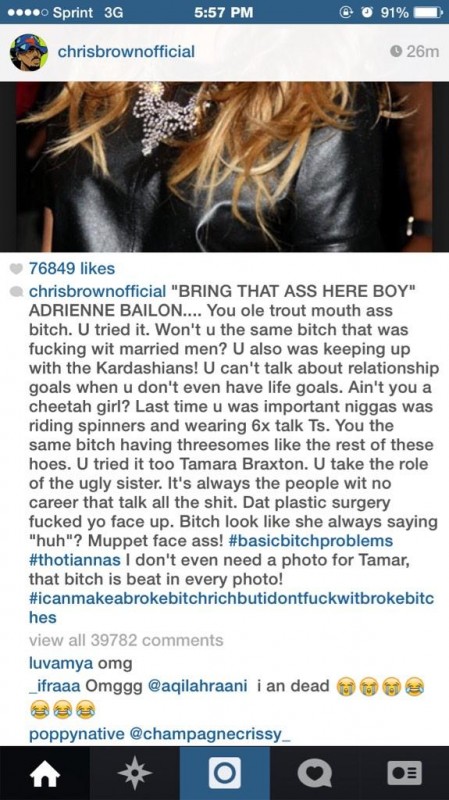 Brown has since put up this new Instagram post, ranting about people picking on him all the time:

Yesterday's roast was amusing to some and disrespectful to others. All in all the whole shit was childish. I could've have been politically correct and went about the situation more civilised but I'm not fake nor do I need to ever comment on anyone's life. I felt the need to say what I felt. It seems everyone can always have an opinion on "CHRIS BROWN" and chime in whenever they want. The show was depicting relationships. They gave their views on my relationship by bashing my significant other for being with me publicly on national television. There are too many Pots calling the kettle black. I know that with me being a public figure and one of the best at what I do it's more of a story to talk about. It comes with the territory. Like I said before, I say what I feel and what I want especially if anyone has an opinion about me and mine. Somedays I'll be cool and then other days ima roast ya ass. So this isn't an apology for yesterday. Just a reflection. People, live ya life, you'll mess around and go blind looking at me all the time. #teambreezyaintwitthebullshit

Braxton responded on Instagram by scolding Brown, saying, in part, “u are NOT my MAN or my DADDY so you got me completely FUCKED up!…(like your reputation).” That lengthy Instagram response can be found here.

Bailon also responded by saying she was speaking generally about bad relationships, not about Brown’s in general.