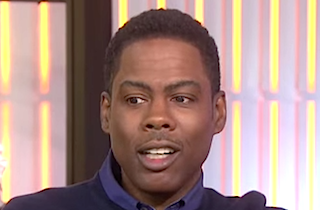 When a grand jury in Staten Island decided not to indict an NYPD officer for the death of Eric Garner, Jon Stewart’s initial reaction was, “If comedy is tragedy plus time, I need more fucking time.” It wasn’t until the next night that he was able to find some comedy in the way certain people reacted to the news.

During an interview with Fresh Air’s Terry Gross this week, comedian Chris Rock expressed a similar sentiment. “It’s the old thing they say — ‘tragedy plus time is comedy’ — but you probably couldn’t tell a joke about it yesterday,” Rock said.

“By the way, the joke is never going to be about Eric,” he explained. “The joke would be about the hypocrisy. What did I write the other day? ‘Are black men an endangered species? No, because endangered species are protected by the law.'”

On the day of the non-indictment, among promotional messages for his new film, Top Five, Rock tweeted out this concise statement along with the link to a photo of Garner in the chokehold that ultimately killed him:

And hear the full interview at npr.org.