Christine O’Donnell Questions The Separation Of Church And State (Update) 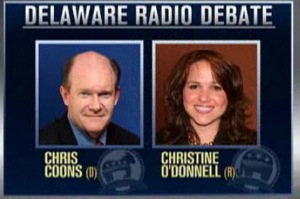 During a debate in front of legal scholars and law students at Widener University Law School this morning, Republican Senate candidate Christine O’Donnell questioned whether the U.S. Constitution calls for a separation of church and state. After her opponent Chris Coons stated that private and parochial schools are free to teach creationism but that religion “doesn’t belong in our public schools,” O’Donnell replied “where in the Constitution is the separation of church and state?”

The exchange came in a debate before an audience of legal scholars and law students at Widener University Law School, as O’Donnell criticized Democratic nominee Chris Coons’ position that teaching creationism in public school would violate the First Amendment by promoting religious doctrine.

Coons said private and parochial schools are free to teach creationism but that “religious doctrine doesn’t belong in our public schools.”

“Where in the Constitution is the separation of church and state?” O’Donnell asked him.

Her comments, in a debate aired on radio station WDEL, generated a buzz in the audience.

Of course, it’s worth noting that nowhere in the U.S. Constitution does the phrase “separation of church and state” appear. However, some would argue that to ask such a question reveals a level of naivete that certainly doesn’t help one’s political efforts. Maybe Meghan McCain was right when she notoriously referred to the Sarah Palin endorsed Tea Party candidate as a “nutjob”?

Update – Matt Moran, campaign manager for Christine O’Donnell, the Republican nominee for U.S. Senate, today issued the following statement to address the conversation of whether the separation of church and state is stated in the First Amendment to the U.S. Constitution.

“Christine O’Donnell was not questioning the concept of separation of church and state as subsequently established by the courts. She simply made the point that the phrase appears nowhere in the Constitution. It was in fact Chris Coons who demonstrated his Constitutional ignorance when he could not name the five freedoms contained in the First Amendment.”