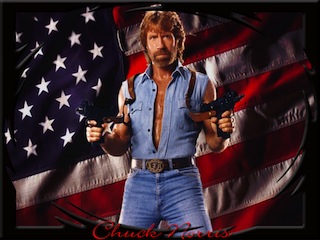 Well, it looks like Walker, Texas Ranger is following closely on the boot heels of Perry, Texas Governor. That’s right, just like Rick Perry before him, Chuck Norris has endorsed Newt Gingrich for president. It’s weird because, from what I’ve gathered on the Internet, Chuck Norris doesn’t typically endorse candidates publicly. He merely thinks about them and all the other candidates die instantly.

In his regular column for the conservative site World Net Daily, Norris explained that “our republic as America’s founders created it is under assault” and repeated 10 questions that he had previously put forth to choose who will get his vote. These include who will best beat President Obama and who is most committed to the Constitution. He then explained that he and his wife felt that Gingrich fit the best.

“For my wife, Gena, and I, we sincerely believe former Speaker Newt Gingrich is the answer to most of those questions and deserves our endorsement and vote.

We agree with our friend and governor of the great state of Texas, Rick Perry, when he suspended his campaign and endorsed Gingrich, that Newt ‘has the heart of a conservative reformer.’ We believe Newt’s experience, leadership, knowledge, wisdom, faith and even humility to learn from his failures (personal and public) can return America to her glory days. And he is the best man left on the battlefield who is able to outwit, outplay and outlast Obama and his campaign machine.”

Also like Perry, Norris explained away the issues in Gingrich’s past, reminding readers that “we all have skeletons in our closet.” And he implored Gingrich to utilize “the expertise and skill sets” of the other candidates.