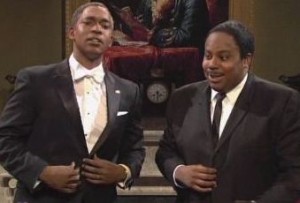 The long-running sketch comedy show Saturday Night Live has gotten some attention recently for the lack of black women on the cast. Cast member Jay Pharoah said it’s about time SNL hires one, while Kenan Thompson said they haven’t found any black comediennes who are ready to be a Not Ready for Prime Time Player. Now the civil rights group Color of Change is setting its sights on SNL for lacking a single black woman.

Rashad Robinson, the executive director of ColorOfChange, sent an open letter to showrunner Lorne Michaels and the producers of the show, calling them out for “the callous, monolithic representations of Black people peddled by SNL” on numerous occasions.

SNL has had exactly three black women in its cast in its 38-year history, and hasn’t had one since Maya Rudolph left the show in 2007. Since then, Robinson charges that SNL has been putting on offensive caricatures of black women.

Robinson requests a meeting with Michaels by no later than Wednesday, November 6th to “discuss how you will improve the situation at SNL.”

Following Thompson’s comments about the lack of black female talent applying for the show, three such comedians called him out for the assertion and for how irrelevant SNL has become anyway.