Clintons Defend Foundation’s Record: It’s a ‘Charity, and Somehow That Has Gotten Lost’ 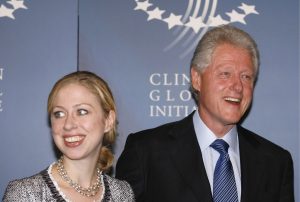 Following a raft of accusations of corruption, Bill and Chelsea Clinton defended the record of the charitable foundation that bears their name.

The foundation, which was created in 1997, has been hit with accusations that its fundraising apparatus serves as a smokescreen for various states, corporations, and individuals purchasing favor and influence with the Clintons.

Such allegations formed the basis of Peter Schweitzer‘s 2015 book Clinton Cash, which its publisher reissued with multiple factual corrections. An AP investigation found that several foundation donors met with Clinton while she was Secretary of State. Emails stolen from Clinton’s campaign chair and made public via Wikileaks have provided the foundation’s critics with additional fodder, as they shed light on the messy intersections of the Clintons’ public service, personal incomes, and the foundation’s fundraising efforts.

Multiple newspaper editorial boards have called on Hillary Clinton to shut down or remove herself from the foundation, as their continued connection bespeaks — at the very least — the appearance of impropriety. Republicans allege far worse graft in the form of “pay for play” transactions.

“First and foremost the Clinton Foundation is a charity, and somehow that has gotten lost,” Chelsea, the foundation’s vice chairman, said.

Bill defended the foundation in August, shortly after the AP report came out, telling reporters in Atlanta:

We’re trying to do good things. If there’s something wrong with creating jobs and saving lives, I don’t know what it is. The people who gave the money knew exactly what they were doing. I have nothing to say, except I’m really proud of the work they’ve done.

If Clinton wins the election, the campaign has said she and Bill will remove themselves from the foundation’s board but Chelsea would stay on — an outcome Bill claimed did not represent a conflict of interest.