Cliven Bundy Wants to Teach You American History on YouTube 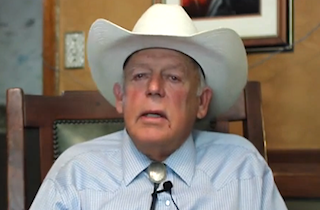 Remember Cliven Bundy? He was that kooky Nevada rancher who refused to acknowledge the U.S. government and pay grazing fees for his cattle. Some Fox News hosts, especially Sean Hannity, thought he was the bee’s knees, until he started sharing his thoughts about “the Negro.” Then L.A. Clippers owner Donald Sterling was caught on tape making racist comments, and so America found a new elderly racist man to obsess over.

If you were wondering what Bundy has been up to since the media stopped paying attention to him, Gawker’s Adam Weinstein has your answer. Apparently, the rancher felt that the world needed to know more of his unique conceptions of American history, so he launched a series of video lectures on YouTube, covering everything from the U.S. Constitution to the “proper form of government.”

Weinstein dove deep into the videos, which are currently set to private on Bundy’s YouTube channel. Apparently, the idea is that the rancher wants you to give him your email address so he can send the links (and whatever else he thinks you might need to know) directly to you.

But fortunately for all of us, the video are still easy enough to find and embed. Weinstein summarizes the lessons as such:

A lot of hilariously incorrect bullshit. To wit, Bundy explains the following:

How America started with some pilgrims in a sailboat who thought the world—or “the ocean,” in Bundy’s parlance—was flat and had edges you could fall off.
How the 13 colonies waged the American Revolution against “Europe,” which had the largest army ever.
How the Constitution is divinely inspired and useless without the Ten Commandments.
How fans of vigorous federalism like Washington, Madison and Hamilton “didn’t want a big central government, we didn’t want a big state government, we was even leery about having even a local government.”
How the founding fathers set up the three branches of U.S. government, including the “adjudical” or “judical.”

In another video, he answers the question, “Can You Describe Our Current Situation?” with a lesson about the three branches of government.

“Our government is become just sort of the opposite what our founding fathers wanted they created three branches of government,” Bundy says. “Our executive… uh… uh, our legislature, and… our… adjudical. And they warned and warned that they didn’t to be able want these three governments to be able to make these kinds of rules and regulations.”

If you want to learn more, and don’t want to give Cliven Bundy your email address, head on over to Gawker.