Conservatives on Twitter were pretty shocked over this CNN headline today: 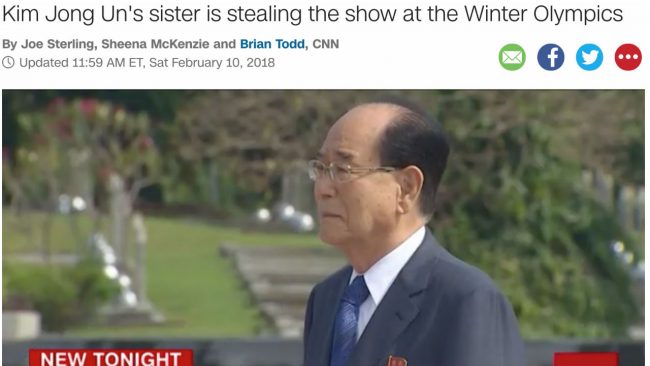 The CNN report on Kim Yo Jong says, “With a smile, a handshake and a warm message in South Korea’s presidential guest book, Kim Yo Jong has struck a chord with the public just one day into the PyeongChang Games… Seen by some as her brother’s answer to American first daughter Ivanka Trump, Kim, 30, is not only a powerful member of Kim Jong Un’s kitchen cabinet but also a foil to the perception of North Korea as antiquated and militaristic.”

There is a lot of serious and substantive information about her in the report, but given the, well, stunning headline framing of a report about the sister of a dictator, CNN got a fair amount of criticism online:

This normalization of North Korea is truly sickening. While Kim Jong Un’s sister and their cheerleaders are enjoying themselves in South Korea, many North Koreans are starving to death and being tortured in work camps. pic.twitter.com/x3y1gf7KxK

Hm. @cnn keeps calling Kim Yo Jong's North Korea's Ivanka, which I can't help but think is a grave insult to Kim Yo Jong https://t.co/efMwdAMkUG

Isn’t it charming, the loving coverage CNN gives to a murderous dictator’s sister? Compare and contrast with how they treat other heads of state’s family…pic.twitter.com/Lq6onoiY8s

Literally everyone who’s seal-clapping for the NorK Gulag Queen for scowling at Pence is a gigantic, gigantic asshole https://t.co/d6cAD1rOsU

I'll have to start a countdown clock to when I stop laughing at this ridiculous headline and story https://t.co/yVERHHyOIP pic.twitter.com/FUI4BRHp7D

WTF is wrong with these people? https://t.co/VkEHkA5kOR

Will media’s Communist hagiography from NYT celebration of 1917 revolutions to love fest over member of a family responsible for running a gulag state of misery, starvation and executions ever end? Or is it just a politically useful part of “resistance?” https://t.co/HeESslc3wq

Oh, for the love of… pic.twitter.com/Ke0pO1HeBo

And on top of that, there’s also the reaction to a GIF of her “side-eye” at VP Mike Pence:

Why are people in the replies treating Kim’s sister like she’s some icon throwing shade and not the member of a family that has terrorized its people for 60 years. FFS people you can disagree with the VP…even hate him….without praising the Kims or agreeing with them. https://t.co/xTKizY9xP2

Yeah I'm actually ok with a murderous regime not being into our Vice President https://t.co/9XapDZM89l