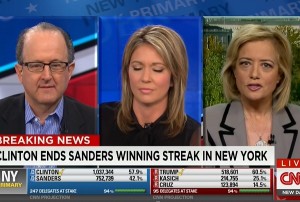 It is becoming increasingly clear that Bernie Sanders is being poorly served by his staffers, surrogates, and supporters, whose reckless and offensive attacks on Hillary Clinton may well have contributed to Sanders’ crushing defeat in New York Tuesday night. Even as the Sanders campaign looks for a way to continue forward gracefully, supporters like pro-Sanders strategist Jonathan Tasini continue to put the Sanders movement’s worst foot forward on the national stage.

On CNN’s New Day Wednesday morning, Tasini burnished the Team Bernie image by attacking anchor Brooke Baldwin, mocking her attempt to press a Clinton spokesman over Wall Street speech transcripts, and when he wasn’t making faces while CNN political contributor and Hillary Clinton supporter Hilary Rosen was speaking, he was trying his damnedest to interrupt her. As it turns out, though, Baldwin and Rosen were not the ones TBFW:

Baldwin: By the way, I do take offense when you throw me under the bus. Thank you.

Tasini: I was saying as a representative of the media. Let me say, though, give credit to Dana Bash, for example, when she pressed in the debate three times about the transcripts. It’s not an entire…

Baldwin: I get it, Hilary, jump in, because on substance it’s fair, but on tone it’s different. Go ahead.

Rosen: Brooke pressed the campaign on transcripts, though.

Tasini: Oh, she asked one question, but…

Rosen took the words right out of my mouth. Given the events of the past few weeks, and the task that lies ahead, the last thing Bernie Sanders needs right now is his supporters going on TV and attacking women, even if those women give it right back with mustard on it. One of Bernie Sanders’ greatest assets going into this campaign was the deep well of affection he had among liberals, affection that only increased as voters got to know his blunt but authentic personality. That made it really difficult for the Clinton campaign to go after him early on, and even as recently as the early primaries.

But that well of affection has been poisoned, of late, by dishonest, outright false, and often deranged and offensive attacks on Hillary by Sanders’ assorted surrogates and staffers. From calling Hillary a “Democratic whore” to blaming her for the rise of ISIS to essentially calling her a murderer, the people in Bernie Sanders’ orbit have been trying the patience of normal people who just don’t want to see Donald Trump become president, and have been putting a stink on Bernie Sanders that he doesn’t deserve, and will need a whole lot of Febreeze to get rid of.