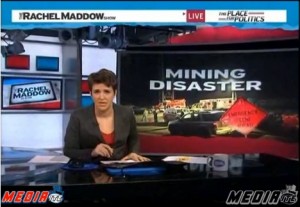 On her MSNBC show last night, Rachel Maddow devoted a segment to the tragic mine explosion that killed at least 25 miners in West Virginia on Monday. While the cause of the explosion is not yet known, the mine’s record of safety violations has become a focal point of the news coverage. In the month of March alone, the mine’s owner, Massey Energy, was cited 50 times, including failure to maintain proper escape routes and poor ventilation of dust and methane.

Maddow makes the excellent point that this industry has demonstrated, repeatedly, that it will not do the right thing unless forced to, and even then, often won’t. As you watch this segment, think about how this issue translates to industries like the financial and health care sectors.

I remember a few years ago agonizing along with the rest of America over the collective fate of 6 coal miners trapped in Utah’s Crandall Canyon mine. The six were never found, and 3 more people died in the rescue effort.

The mine’s owner, Robert Murray, got some good press initially by rolling up his sleeves at the site of the disaster, making frequent impassioned statements for the television cameras. At one point, Murray said “Had I known that this evil mountain, this alive mountain, would do what it did, I would never have sent the miners in here. I’ll never go near that mountain again,” a reference to his claim that an earthquake had caused the collapse.

As it turns out, the “earthquake” was actually the mine collapse itself. The collapse was caused by Murray’s desire to squeeze every last nickel out of that mine through a dangerous process called “retreat mining.” Although Murray denied it was being used, federal authorities say it was. The government fined Murray subsidiary Agapito Associates, concluding it had “directly contributed to the death of nine people.”

Retreat mining is the most dangerous type of mining there is, and it’s not hard to understand why when you read the description:

Retreat mining is a term used to reference the final phase of an underground mining technique known as room and pillar mining. This involves excavating a room or chamber while leaving behind pillars of material for support. This excavation is carried out in a pattern advancing away from the entrance of a mine. Once a deposit has been exhausted using this method, the pillars that were left behind initially are removed, or ‘pulled’, retreating back towards the mine’s entrance. After the pillars are removed, the roof (or back) is allowed to collapse behind the mining area. Pillar removal must occur in a very precise order in order to reduce the risks to workers, due to the high stresses placed on the remaining pillars by the abutment stresses of the caving ground.

So why do companies like Murray Energy take risks like this? Are they evil? No. Corporations are subject to the same laws of human nature that we are, but our government has been so tipped in their favor, they don’t have the same limits we do. If you decide not to get car insurance, it’s not because you don’t care if you get in an accident, it’s because you don’t think you will. The difference is, if you get caught not having insurance, your car will be impounded and you’ll be completely screwed.

Corporations, on the other hand, face fines that they can well afford, and which they often simply flout.

So the next time you hear some corporatist politician, Republican or Democrat, talking about “onerous regulations,” think about these coal miners, and don’t ask yourself who has their best interests at heart but, rather, who has interests that compete with them.