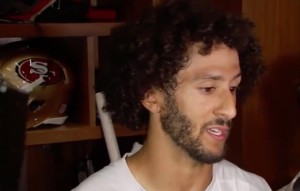 Colin Kaepernick‘s protests of police brutality against people of color have gained national attention since he was seen sitting for the National Anthem prior to the San Francisco 49ers Aug. 26 preseason game. But a new report indicates that his acts of protest go back several weeks, and extend to more than just his refusal to stand for the Anthem.

According to CBS Sports, Kaepernick has been wearing socks at team practices which appear to depict police officers as pigs. He’s reportedly been wearing the socks since Aug. 10.

The socks appear to show caricatures of pigs wearing blue police hats. It’s unclear how often Kaepernick has worn them. According to the CBS report, the quarterback has not yet been asked about his socks.

Kaepernick’s 49ers play the San Diego Chargers tonight. Prior to the game, 240 people serving in various branches of the Armed Forces are scheduled to present the Colors. The San Francisco Gate reports that Kaepernick will again sit for the Anthem tonight.