Too Hot in the Hot Tub 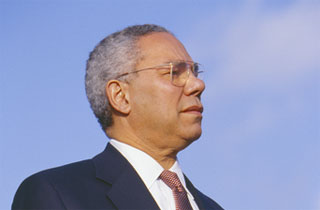 What do you do when you’re the US Secretary of State, and world leaders constantly insist on giving you portraits of yourself? Former Secretary of State Colin Powell points out that you can’t turn them down: “You’ve got to remember that these are given to you as a sign of respect,” he told the Washington Post in a recent interview. So he keeps them all. In his hot tub room.

Most of the time, diplomatic gifts are sent immediately to the National Archives, especially if they’re really weird (i.e., Muammar Qaddafi’s love song about Condi Rice). But sometimes, you can’t not accept a gift, especially if it’s a particularly important one, like a portrait. According to Powell, the most diplomatic response is “This will occupy a treasured place in my office” — but there’s a possibility that the portrait may not be there when the emissary visits again, and may offend them.

The alternative — especially with more horrendous portraits you may not want lying around the office — is “This will occupy an honored place in my home”:

Powell recalled getting a portrait from a Balkan country that made him look a lot like Count Dracula. There was another from Japan that had him with a vague resemblance to Emperor Hirohito, and one from Egypt where he might have been a cousin to former leader Hosni Mubarak.

Some of these “are prominently displayed in my hot tub room,” he noted. (Yes, Loop fans, Powell has a hot tub room.)

Thankfully, the likelihood of a diplomat ever visiting Colin Powell’s personal home is slim, so he’s free to sit in his hot tub while surrounded by Dracula paintings.