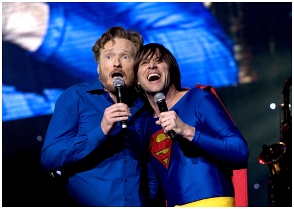 Conan O’Brien live comedy/music tour took him to a familiar place last night – the Universal lot where he used to shoot The Tonight Show.

He used the opportunity to perform what may be the highlight of the tour so far – a duet with Jim Carrey (who was dressed as Superman) – with a clip craftily disseminated to his millions of fans through new media.

“I’m doing my live show tonight from the Universal lot where I taped The Tonight Show. So if a shot rings out, tell my wife I loved her,” Conan tweeted before the show last night. And the references to his former employer, and the location irony, continued during the show. “Listen very carefully,” he said, pointing NBCU’s direction. “Bad ideas are being greenlit.”

The celebrities came out in full force for the L.A. show, but none bigger than Carrey, a frequent guest from Conan’s Late Night days. The two shared the stage for a funny, but also solidly sung, performance of Five For Fighting’s early 2000s hit “Superman” – with Carrey dressed as the character.

But since it was a live show, how would more than a few thousand get to share in the experience? A combination of YouTube, Twitter and Conan’s growing tour blog. Someone in the audience taped the performance, and put it on YouTube. Then tour blogger and former Tonight Show staffer Aaron Bleyaert put it on TeamCoco.com, tweeted it out himself, and Conan followed suit. His 800,000+ followers were instantly alerted to the performance. How many views will this clip have in 24 hours? Most likely hundreds of thousands. Thanks to some creative new media go-arounds, everyone can share in the Conan experience NBCU tried to avoid.