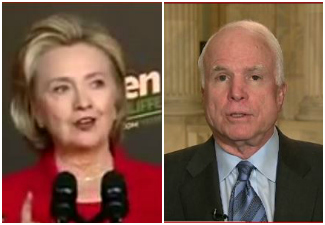 Hillary Clinton is dominating the cable news landscape for a second consecutive week. A few days ago, it was 1998 all over again with the resurfacing of Monica. And for the past two days, Hillary Clinton’s health—and by extension—age (69 if elected), is being called into question as she mulls over another run for the White House.

A few talking heads are making comparisons to Ronald Reagan. Chuck Todd on Morning Joe this morning: “The fact is she’s the same age as Reagan was. If you’re going to go down this road and try to claim she’s going to have some health issues, then you may have to be throwing your own guy, Ronald Reagan under the bus a little bit. So I think this is a dangerous, tricky road to go down.”

Jay Carney referred to Karl Rove as “Doctor Rove” after the Republican strategist recklessly wondered aloud if the former Secretary of State’s brain was all there after a fall and subsequent blood clot had hospitalized her for 30 days (it was only actually three days). But if we’re looking for hypocrisy from some in the media, late night hosts and Democrats alike from anyone having the audacity to call one’s age and cognitive capacity into question, look no further than 2008 and then-candidate John McCain.

Our first contestant is then-candidate Obama, who inferred in an interview with CNN that McCain didn’t have all of his marbles, either.

Senator Obama, May 2008: “For him to toss out comments like that I think is an example of him losing his bearings as he pursues this nomination.”

But that’s nothing compared to the ad his campaign put out a few months later, which included unbecoming footage of McCain at a Capitol Hill hearing in 1982. The Arizona senator is seen wearing giant glasses (customary at the time) and a loud suit (weren’t they all?).

Announcer: “1982, John McCain goes to Washington. Things have changed in the last 26 years, but McCain hasn’t. He admits he still doesn’t know how to use a computer, can’t send an e-mail, still doesn’t understand the economy.”

Then-Team Obama spokesman Dan Pfeiffer stated at the time the campaign was not making an issue of McCain’s age. Naah…of course you weren’t.

Late night hosts also jumped into the fray (just as they will with Hillary on her age and mental status…except they won’t): “John McCain is crisscrossing the United States campaigning,” Jay Leno said in a 2008 opening monologue. “Or as they’re calling it, ‘Antiques Roadshow.'” In a bit of irony, Leno would go on to be chased from his Late Night chair twice thanks to NBC’s effort to go, like, younger.

David Letterman, September 2008: “Senator McCain is in Iraq. Of course, he remembers Iraq when it was known as Mesopotamia.”

As for treatment from many in the media, well…this is almost too easy:

March 2008: MSNBC’s Keith Olbermann said McCain could easily transition from talking about the economy or foreign affairs to talking about “buying more Depends or something like that.”

March 2008: Molly Priesmeyer in the Minnesota Monitor (funded by George Soros): “He looks like Reverend Kane from Poltergeist II. Dude has had a ton of plastic surgery, can’t he afford a dentist?”

Correction: Ms. Priesmeyer was quoting what other people were saying about McCain per Buzzfeed. The quotes above are not hers. – Joe Concha, Mediaite

Great line! Except for, you know…the fact that McCain got his teeth smashed in while a prisoner of war for five years in Vietnam.

Time Magazine cover story title (May 2008): “How Healthy Is John McCain?” The piece goes on to talk about McCain’s battle with skin cancer eight years prior. For effect, the story is complete with a close-up photo of a patch of skin where a scar from surgery remains.

And could you ever imagine Good Morning America using this tactic—playing late-night jokes to a candidate Clinton about her age—and then asking for her reaction? Take this actual exchange for reference:

ROBIN ROBERTS: You brought up a number of good points in your speech last night. And it was well received. You got a lot of applause when you said you are clearly the most experienced, as you put it. You’re 71. You would be 72 on Election Day and the late night comics have taken note of your age as well. I want to get your reaction to this:

[VIDEO CLIP PLAYS][Jay Leno:] “Do you realize when Castro came to power in 1959, John McCain was only 61 years old. [Conan O’Brien:] “Senator John McCain is doing very well. Senator John McCain has unveiled a new campaign slogan. Ready to lead America into the 21st century. Yeah. Yeah. And this is a lot better than his old slogan. I’ve been around since the 19th century. This is an improvement.”

ROBERTS: Senator McCain, when you hear comments like that, and you laugh along. Like I said, watching your speech last night, you said you are clearly the most experienced, but are you concerned at all? There are some people looking at your age as a serious issue.

JOHN MCCAIN: Well, just watch me campaign. As I said in the beginning of this, I could out campaign anybody. And I can and I will. And take a look at the vigor, and take a look at my vision for the future of this country.

If Hillary Clinton does decide to run, two words you’re going to hear often regarding media analysis will be “double standard.”

Because if you think Mrs. Clinton will remotely be forced to endure anything close to what John McCain did in 2008, well… you may be the one in need of a doctor.

Correction: The quote attributed to Molly Priesmeyer was not her stating an opinion, she was quoting what others were saying about John McCain’s teeth. However, she did say this about McCain in the same piece: “While looks are an easy and lame target, it’s at least refreshing to see McCain’s teeth get a razzing (though unfortunately, not a cleaning).” – Jon Nicosia, Managing Editor (5/17/14)
— —
>> Follow Joe Concha (@ConchaMedia) on Twitter