Condi Rice To Katie Couric: Intelligence Was Not “Cherry-Picked” To Get Us Into War 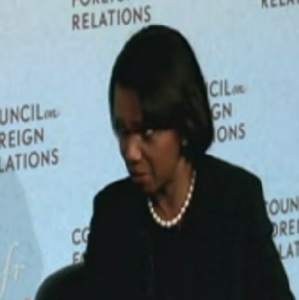 At the Council of Foreign Relations, former Secretary of State Condoleezza Rice subjected herself to something not even Sarah Palin would be willing to endure: an interview with Katie Couric. While Couric came out swinging, Condi is one Republican woman who won’t go down without a fight, as she gave an unapologetic and passionate defense of the rationale behind invading Iraq.

In a lengthy discussion, the most heated moment came when the conversation launched into the debate over the Iraq War, with Couric questioning:

On Iraq, books have been written, as you know, many, many books; documentaries have been made about how intelligence was incorrectly analyzed and cherry-picked to build an argument for war, and memos from that time do suggest that officials knew there was a small chance of actually finding weapons of mass destruction in Iraq.

Rice did not take the bait, and her reaction suggests that if she had been drinking water she would have spit it out in shock. Rice refused to agree with the premise of the question and stated that no one could be certain of anything with an opaque regime like Saddam Hussein‘s Iraq was, but did declare:

Couric’s use of the phrase “cherry-picked” intelligence is likely what set off Rice, since that is common phraseology of the crowd who believes President Bush deliberately lied to get America into war. Meanwhile Rice’s repeated assertion that the world is better off without Hussein might be a true statement, but ultimately dodged Couric’s repeated attempt to learn whether in the absence of weapons of mass destruction, there was another rationale for the Iraq war.

Watch the fun passive-aggressive battle between the two in the clip below: