Congressional Dems Are Not Heroes; They are Hypocrites Who Are Making Us Less Safe
Opinion
Guest Colunm

Congressional Dems Are Not Heroes; They are Hypocrites Who Are Making Us Less Safe 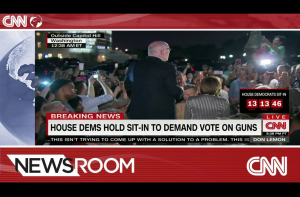 On Wednesday night, a cadre of House and Senate Democrats staged a “sit-in” on the House floor demanding a vote on various gun control measures, the best of which was defeated by the Senate Democrats on Monday. This does not make these protesters heroes. It makes them hypocrites, and they are making us less safe.

That is why Sen. John Cornyn (R-TX) proposed a bill that would temporarily block the sale of weapons to individuals in the Terrorist Screening Database, but included important due process protections. In order to uphold a determination blocking a gun sale, the government would have to introduce evidence before a judge to demonstrate probable cause within 72 hours.

(Let’s set aside, for a moment, how problematic secret government lists are – lists where people do not know if they are on them and have little or no recourse to get off of them. And we’ll set aside, for the moment, the fact that Rep. John Lewis (D-GA), the leader of the sit-in, himself was once the subject of a secret FBI file because he was a Civil Rights Activist.)

The Democrats were able to defeat Sen. Cornyn’s proposal, decrying it as a logistical nightmare. Except that it’s not. Every day, in cities and towns across America, law enforcement officials sign sworn affidavits and/or testify before judges alleging specific facts that raise suspicion to the level of probable cause in order to justify curtailing someone’s rights. Every day, in cities and towns across America, judges also seal sensitive, confidential court records to preserve privacy and investigatory privileges. Yet somehow, according to congressional Democrats, these routine actions are just utterly inconceivable.

And that brings us to the point. Given that the Democrats’ position here is so preposterous – alleging that routine events are impossible – why on earth would they do something like this? The answer is simple: theater and money. The media dutifully played along with their farce, calling it “historic” and “extraordinary,” resulting in the protesting miscreants actually applauding congressional correspondents for their cooperation. And following the fawning coverage, the Democratic Congressional Campaign Committee sent out a fundraising email, which will surely be followed by fundraising events in swing districts across the country.

I do not begrudge congressional candidates’ schemes to capture attention and raise money. It is part of the game. However, I take umbrage when they do so by way of dishonest demagoguery. The kabuki theater they’ve put together this week is particularly gross, and believe me, that is saying something. They sang “We Shall Overcome,” on the floor of the House, for God’s sake — a song synonymous with the Civil Rights Movement — except this time they sang it as part of an effort to take away due process rights. So these people are not worthy of admiration. They are not brave. They are lying, scheming politicians trying to pull at your heart strings in order to bring you close enough so they can steal your wallet. Don’t fall for it.