One of the best-kept secrets in the world of political humor is Newsbusted, a weekly news parody show put out by Brent Bozell‘s conservative media watchdog, Newsbusters. Anchored by Jodi Miller, and fueled by an amped-up laughter and applause track, Newsbusted consistently earns those canned laughs, no more so than this week, when the show featured its funniest joke ever, a laff-riot about the 9/11 hijackers.

Of course, being the “funniest joke ever” on Newsbusted is the same as being the least funny joke ever on Newsbusted, because on a scale of 1 to 10, with 1 being “smile to yourself” funny, and 10 being “laugh out loud” funny, Newsbusted‘s jokes consistently rate “listen to Emo records and pick at your own scabs” funny. This is, by no means, a slam on Jodi Miller, who delivers the quips with conviction and energy, and who, I’m sure, doesn’t write this stuff.

Still, she should have put the brakes on this week before being filmed cracking wise next to a photograph of the actual deaths of thousands of people. I’ll let the audience, left, right, and center, decide if the joke itself is funny. Referencing President Obama‘s apology to Afghan President Hamid Karzai for the inadvertent burning of Korans at Bagram Air Force Base, Miller said that “Obama’s next step is to apologize to the families of the 9/11 hijackers, who were killed by America’s tall buildings and Pentagon.”

Set aside the glaring dissonance of the premise, that President Obama, who has killed so many terrorists that even Republicans cringe like a kindergarten class on a field trip to Christian Night at the Roman Colosseum, would apologize to the 9/11 hijackers whose boss he had killed. Set aside the questionable propriety of 9/11 humor in general. Set aside the fact that there are a hundred ways to joke about the fake “Obama apology” narrative without making people throw up.

Set all of that aside. In what universe will it ever be appropriate to laugh and applaud while this picture is onscreen? 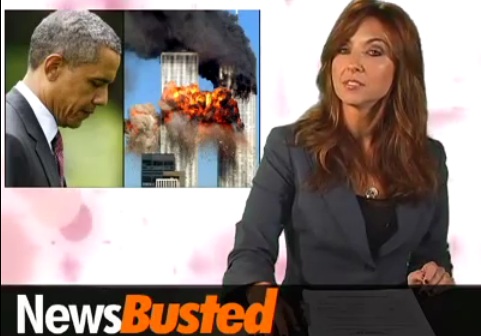 Maybe the right question is, “In what America?”

Here’s the clip, from Newsbusters. Enjoy the show.