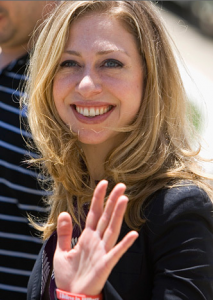 Something strange is going on here: Conservatives don’t like money.

That’s the message I’m getting from the extreme distaste some conservative critics have shown for Chelsea Clinton‘s wedding. Forget about Rush Limbaugh’s $54 million Gulfstream jet, Mitt Romney’s $42 million donation to his own presidential campaign, John McCain’s seven or eight houses, the RNC’s vacations in Hawaii — the real source of outrage is Chelsea’s big fat Liberal wedding, and its estimated price tag of $2-3 million.  For shame! Never mind President George W. Bush once joking at a dinner about “the haves and the have-mores….Some people call you the elite. I call you my base” — apparently, it’s now completely uncool to have money and spend it.

Over at Newsbusters, Kyle Drennan was outraged that guests of the Clinton-Mezvinsky wedding would be perching on porcelain port-a-potties, and was shocked — shocked! — that a segment on the CBS Early Show “did not raise any questions about the over-the-top extravagance of the affair, which is estimated to cost a few million dollars.” At Wizbang, the Clinton-wedding price tag was tut-tutted disapprovingly, and Chelsea was compared unflatteringly to Jenna Bush, whose private wedding on her parents’ ranch in Crawford was apparently a model of fiscal restraint.

It’s a strange double standard. I wrote about it earlier today at AOL:

Estimates for the Crawford wedding seem to be at $100,000, though I can’t find an official, confirmed source and I have to say that sounds more than a bit low (I do know that the Bushes saved on the cost of renting a property because they own their ranch!). By contrast — and it’s a contrast lots of critics have made (some abhorrently so) — Chelsea’s nuptials are estimated at $2 million, at least. (If that – the wedding details have been kept strictly private, and that may well be an inflated estimate.) Never mind that the median price of an American wedding is apparently $17,500 – way less than Chelsea’s nups, but probably representing a much greater percentage of financial resources for the families involved.

…The Clintons are rich. So are the Bushes. So are a lot of people in the higher echelons of the government. Senators! Congresspeople! Mitt Romney! Meg Whitman! Rich people have more money, and thus seem to spend it in wild disproportion to the rest of society. Romney spent an estimated $42-million of his own money on his 2008 presidential bid; now his name is on the shortlist of potential GOP nominees for 2012. Is spending $2 million to pay local businesses to put on your event so much worse than spending ten times as much on high-priced Beltway consultants? Rich people spend money differently, whether they’re Republicans or Democrats. But it’s amazing how the double-standard is applied depending on who is outraged by what.

Of all of it, it’s the Romney stat that gets me. $42 million! Of his own money! That’s not for a private, family event, either — that’s in a public election campaign, arguably where there are more pressing concerns implicated. I’m not saying that Romney shouldn’t be able to donate to his own campaign – like Hillary Clinton did! – I’m saying that there’s something wildly off here in all of the hand-wringing over Chelsea’s wedding costs. Let’s just find a standard and stick to it, okay? Because otherwise, it all amounts to not much more than what you might find in a porcelain port-a-potty.

p.s. To all those people nonplussed that Chelsea is being treated as special – well, sorry, but she is special. Politico’s Glenn Thrush wondered on Twitter about all the hype, asking if “meritocratically, isn’t she basically a 30y/o hedge funder headed to grad school?” Um, no. Perhaps a writer for POLITICO might grasp that. Gail Collins had it right: “Chelsea has been a national public figure against her will since she was 12, and in all that time she has never embarrassed her family — or us.” But let’s look at the flip side – that people feel entitled to write crap like this: “Chelsea Clinton is an ugly duckling who turned not into a beautiful swan, but a somewhat cute chick. Is this why she is sparing no expense for her wedding?” (Wrist slap for you, Robert Paul Reyes.) Yep. Not just some average 30 year old. Let her have her not-just-average wedding.

Photo of Chelsea Clinton via CityFile.