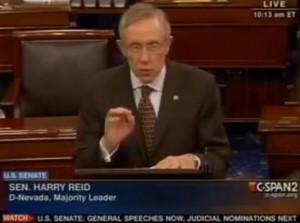 Conservative websites like The Blaze and Gateway Pundit (and even Fair and Balanced™ ones like Fox Nation) are working themselves into lathers of varied thickness over what they claim is Sen. Harry Reid’s (D-NV) omission of the words “under God” from the Pledge of Allegiance on the Senate floor. While it is true that Reid didn’t say “under God,” he also didn’t really omit it.

I’m actually a little disappointed in Reid, because when I saw all of these headlines, I though maybe he was taking a stand against this theocratic oddity in our Pledge, but alas, that is not the case. The clip that these folks are referencing doesn’t actually feature a recitation of the Pledge of Allegiance, but rather, a specifically-framed quotation from it:

Reid references the Civil War era, at which time the Pledge didn’t even exist yet, and is clearly highlighting the relationship between that conflict, and the Pledge’s promise of unity.

To be fair, The Blaze notes the distinction, if not all that fairly:

Sure they will say it was intentional use of a partial phrase meant to emphasize the importance of national unity and not to be a strict quotation…but how hard is it just to leave the those two key words in there?

While I’m sure they’re right, and Reid only did it to emphasize the relevant portion of the Pledge, I would submit that there was a very good reason to omit “under God” in this context, aside from the obvious First Amendment reasons. The Civil War was a conflict fought over slavery, an institution whose supporters claimed divine justification to defend it. I would argue that being “under God” and “indivisible” were somewhat incompatible in that case.

Even if you think that there’s no problem with including “under God” in the Pledge of Allegiance, why not be a little more inclusive? We could take a page from Billy Joel’s “We Didn’t Start the Fire,” and replace that section with “under God, under Allah, under Vishnu, under Buddha, under Gaia, under Cthulhu, under Jee-bus…”

What could be more American than that?

Update: Not everyone on the right is outraged. As The Right Scoop points out, none other than Glenn Beck vigorously defends Reid in much the same way I did. The end is near.