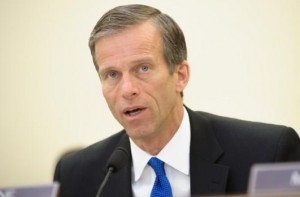 The Republican-controlled Senate Commerce Committee sent a letter Tuesday to Facebook CEO Mark Zuckerberg demanding an explanation for a recent claim that Facebook’s trending news curators frequently blocked conservative news and outlets. The strongly-worded letter from committee chairman and South Dakota Senator John Thune demands that Facebook lay out exactly how it determines what topics becoming “Trending,” and whether or not there was a policy to prevent political bias.

I understand the outrage over Facebook’s alleged policies, but to have a state actor swoop in and demands answers goes against everything Republicans have claimed to fight for decades. One of the central tenets of modern conservatism is that government– and the federal government especially– is not your daddy. There is no end to the inconveniences and evils that people face every day, but the government can reliably be counted on to deal with remarkably few of them. The others are much better handled in the private economy and the marketplace of ideas.

Liberals and conservatives may disagree on which issues should fall under government regulation, but for two hundred years there’s been a strong consensus that the press isn’t one of them. The mechanism for punishing misleading or unfair media outlets (and make no mistakes, Facebook is media outlet now) is already in place. It’s called logging off, unsubscribing, and tuning out. In this case, it’s called personally visiting the news outlets you think ought to be promoted rather than expecting a bunch of liberals working out of Silicon Valley to spoonfeed you their links.

Whatever private actions you think should be taken, there sure aren’t any government actions available. Suppose Facebook responds to the Senate inquiry by revealing that yes, they’re all a bunch of conservative-haters who are secretly out to crush those they disagree with. Okay… then what? That’s perfectly within the bounds of the law, and Congress couldn’t outlaw it if they wanted to. There’s simply no public interest to be served by the government sticking its nose in Facebook’s private affairs.

There are only two motives behind the committee’s stunt. The first is obviously to pander to the base. But the second is to not-so-subtly threaten a private company with punishment and inconvenient probing if they don’t push the news a branch of the federal government wants them to push. The chilling effect of that threat alone is just as dangerous to the notions of free speech and free press as if the Senate had punished Facebook with the full force of the law.

Simply as a matter of precedent, conservatives should oppose this move. The rhetoric put forward by Thune and the committee as to why the U.S. Senate should get involved are no different from that a future Democratic tormentor would put forward for harassing, say, Fox News.

If Fox News presents its  election coverage as the result of a neutral, objective  editorial judgment, but it is in fact subjective and filtered to support or suppress particular political viewpoints,  Fox News’ assertion that it maintains  “Fair and balanced” coverage misleads the public.

Fox News must answer these serious allegations and hold those responsible to account if there has been political bias in the dissemination of trending news. Any attempt by a neutral and inclusive  television network to censor or manipulate political discussion is an abuse of trust and inconsistent with the values of open  airwaves.

When it comes to the forced neutrality of media outlets, Republicans fought and won this battle decades ago when the FCC unanimously repealed the Fairness Doctrine under Reagan. Back in the day, privately-owned radio stations were forced to broadcast the opposing view for every issue of importance. It was a blatant violation of the First Amendment, forcing private entities to broadcast views they either simply didn’t want to or vehemently opposed. It’s repeal incidentally worked out pretty well for conservatives; turns out when it’s not required by law, no one really wants to listen to liberal talk radio.

With the exception of the occasional grumbling from a pundit or temper tantrum from Nancy Pelosi, there’s never been a serious attempt by the left to reinstate the Fairness Doctrine. The new consensus is the right one: government has no role dictating to the press what opinions they have to present. That doesn’t change now that the opinions being suppressed happen to be the ones conservatives want to hear.

Oh by the way, guess which politician led the way in sponsoring legislation to ensure the Fairness Doctrine never returns? Senator John Thune.