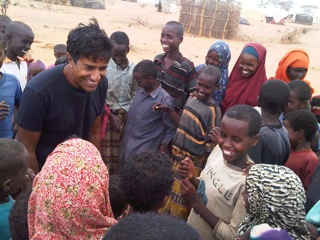 Global crisis has been the theme of the summer for cable news– and it should come as no surprise. But what does to many viewers is that while “crisis” means stock brokers gripping their cheeks on one network, or the President mincing words on another, CNN has made its top story in August the nightmarish faces of the famine in Somalia. Mediaite spoke to CNN Chief Medical Correspondent Dr. Sanjay Gupta this week on the difficulties of bringing a story most can’t bear to watch to viewers, how it has affected him and how to prevent further destruction in the region.

What’s the situation looking like out there in terms of how severe it is and how quickly it can be remedied?

It’s a pretty tragic situation out here. I’ve spent a lot of time in Eastern Africa, and have covered a lot of stories around the world, and– the sheer numbers of people here, as well as how famished, malnourished people are by the time they’re getting into camps is just extraordinary. And I think that’s because you have this situation where people have to walk for, really, a month of walking with their entire family to get to one of these camps, and by the time they get there, they’re skeletons of what they once were. It’s really, from a medical perspective, quite frightening.

As far as numbers go, I mean, I’ll say two things: one is that the estimates come up and down. People, primarily children, who are the most vulnerable here, are particularly on the verge of dying purely of malnutrition. And at this point the numbers are increasing, not decreasing, so it’s hard to tell when the numbers are going to start to go down. It’s going to be a while. Certainly a part of the world where, as you may know, sadly, they’ve had lots of problems and even before those recent droughts there were already several hundred thousand people in these refugee camps. Now the numbers have more than doubled, but this is a long-standing issue in this part of the world.

Is it just food that’s the problem, or are there issues with other nutrients, vaccines, etc?

That’s a good question. The way I was able to put it together– food is, in this particularly situation, the primary driver because of the drought. So the drought goes long, they can’t wash the crops, which affects the livestock that was also dependent on the crops, and then when the livestock are gone, people needed to move. That was the primary driver, but there are more. One issue is that Islamic extremists posted bans on Western aid into the country, and it’s very difficult to get through and direct aid to people who need it. That ban has been presumably lifted now, but for a couple of months, they had to go through these incredibly arduous journeys in order to get any real aid.

The second thing is exactly what you said– there is a real mistrust of vaccinations by certain people in Somalia, and as a result a lot of the kids in these camps are developing diseases like measles and come to camps and receive very little treatment, very little support of the kind that helps keep these diseases from becoming deadly.

The political situation and government structure (or lack thereof) seems to be getting in the way rather than helping. Is there any government help there at all?

No. Somalia, there’s not been a strong government for about 20 years, and with Kenya it’s a tenuous situation because the Kenyan government has allowed some camps, but they want to try and not be in a situation where these camps are not permanent settlements but necessary camps during this period of famine. So it’s not that these are run by organizations, a bunch of them are across the border in Kenya, although I think now in Somalia there may be more as the ban has been, again, presumably lifted, so they may be more comfortable going in. But you know, aid workers have been killed in this part of the world, so they have to be very careful before they start setting up camp.

A sad reality of the television business is that I can’t imagine this coverage has been a ratings boon for you while Americans focus on things like the debt crisis and the economy. How do you reconcile that many people may not be able to get through a full hour of this programming with the importance of getting the story out there?

I agree– I think, as a father, it’s very difficult for me to even be here, I understand that it’s very difficult for people to watch at home. I guess, the thing that I would say is that we are truly a global community, and I think if this were happening somewhere closer to home or even at home, obviously you would pay attention of several thousand people died over the last month. I think it’s much more a perception issue– people are thinking about their 401Ks and things like that, and I completely understand the worry over those kinds of things. When I tell people that fathers and mothers and kids are losing their lives, and they aren’t different from those in your neighborhood, I think it gets to people.

I think there’s also the component that many of these tragedies are completely preventable. People don’t need to be dying in these atrocious numbers. The story brings a little bit more concern, a little bit more passion, through that.

With that in mind, what can an American watching the situation at home do to help? How far does the donation money really go?

I don’t want to sound naive here– there are so many layers in aid organizations. It’s not exactly all going directly to Somalia because of the reasons we talked about earlier. Will it go to developing global communities as part of being cared of, or is it eventually going to destroy global communities because they just bring so much from the outside. So there’s a lot here. But we do have CNN’s Impact Your World site, which allows people to look at organizations that have already been vetted by us. We’re not the arbiters of money, but we have the history of the organization so we can see the non-monetary ways they have an impact as well. As to your question, I wish there was a way I could say “this is what you should do to make this problem better,” and as much as that has to do with funding, as you probably know, the world is more complicated than that, so the Impact Your World site can help people.

And in terms of the global community, are there long-term solutions to keep these problems from recurring, or is this just a product of the climate and organization in that part of the world?

No, no, there are absolutely ways to keep this from happening. This doesn’t happen in most countries around the world. The climate varies, specifically, but there was confidence in that when this occurred. This was neither sudden nor was it a surprise. People knew this drought was coming for over a year. Setting up food reserves in areas were particularly hard hit, investing in drought reserves for agriculture, which exist in parts around the world, obviously having some sort of infrastructure that allows for aid to come to people who need it– those types of things would’ve helped immensely. Then there are things like allowing vaccinations– this is not brain surgery as far as preventing death. They knew this was coming, they should have set up strategic oil reserves, they should have been planting agricultural products because this was an area that was hit with droughts in the past. Feeding the children of the world– we know how to do this, and we should.

Thank you for your time— is there anything else you’d like to add to let viewers know from your coverage out there?

I wish people could just come here and for ten minutes see how the rest of the world lives, so you could see what I’m talking about. This weekend we’re looking specifically looking at the medical issues we’ve been talking about and really trying to focus on outlining these issues and preventing this– solutions that address this so it doesn’t happen again in the future.

Dr. Gupta will deliver a special report on the ground in Somalia on Saturday at 7:30 AM– below is a preview: