Cruz Defends Missing Lynch Confirmation Vote for Fundraiser: ‘Absence Is the Equivalent of a No Vote’

Cruz Defends Missing Lynch Confirmation Vote for Fundraiser: ‘Absence Is the Equivalent of a No Vote’ 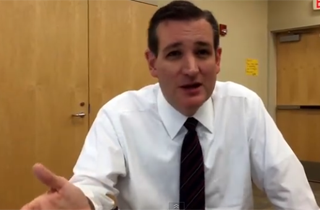 Sen. Ted Cruz (R-TX) is aware that the world thinks he’s an unprincipled hack for abstaining in the Loretta Lynch confirmation vote because the vote conflicted with a scheduled fundraising trip back to Texas. But Cruz is here to use his parliamentarian mumbo-jumbo to turn his missed vote into a “no” vote!

Cruz's new claim on missing Loretta Lynch vote: "Absence is the equivalent of a no vote"

Cruz said, "Cloture was the vote that mattered. It required 60 votes." Reporters corrected that it only took a majority under rules change.

Initially, if this interview he did with the Iowa blog Caffeinated Thoughts indicates anything, Cruz had simply argued that his vote against cloture, AKA the Senate mechanism that ends debate on a bill, was the one that actually mattered:

Cloture was the vote that mattered. It was the 60-vote threshold where if Republicans stood together she would not have been confirmed. Unfortunately, Republican leadership made the decision that they wanted to allow her to be confirmed, and I gave a long and passionate on the Senate floor pointing out that there are a lot of people across the country frustrated.

Here is a chart of 99 other Senators who understand the difference between “yes” and “no”:

A missed vote is not the "equivalent of a no vote," as Ted Cruz says re: Loretta Lynch vote. Handy visualization: pic.twitter.com/ryfRHakf9E