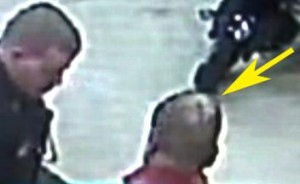 The release of surveillance footage, by the Sanford Police Dept. to ABC News, of Trayvon Martin shooter George Zimmerman showing little or no signs of injury the night of the incident has been called a “game changer” by our own Dan Abrams, and others, because it undercuts Zimmerman’s version of events. However, according to conservative website The Daily Caller‘s “analysis,” the tape might show “a vertical laceration or scar several inches long.”

From The Daily Caller‘s Matthew Boyle:

Surveillance video of George Zimmerman arriving at a Sanford, Fla. police station indicates what may be an injury to the back of his head, a Daily Caller analysis shows.

The Daily Caller’s “analysis” seems to have consisted of taking a screengrab of ABC’s video, then hitting the “sharpen” button on their image editing software. Here’s a comparison of The Daily Caller’s unenhanced screenshot (on the right) with another frame of the video that shows the same spot on Zimmerman’s head, from a different angle:

Viewers can decide for themselves, but reviewing the video, rather than isolating single frames, seems to pretty clearly show that what The DC identifies as a possible “laceration” is actually a dark spot created by variations in the density of Zimmerman’s hair, the curvature of his skull, and the lighting and angle of the shot. That spot on his head is visible and well-lit in other spots on the tape, but nothing is visible. Lacerations don’t disapppear depending on how you light them.

Still, you have to give The Daily Caller credit for being thorough. Actually, a review of The Daily Caller’s coverage of the Trayvon Martin story shows a pattern of a certain kind of thoroughness.

While they were a little bit late to the story (mainstream cable channels began reporting on the story on March 13, but the story broke wide open with the release of the 911 tapes on March 16. Fox News ran its first Trayvon segment on March 19), their priorities were clear from the start. The first story listed under The Daily Caller’s Trayvon Martin tag was a March 22 column defending white culture:

So let me get this straight. An overzealous neighborhood watchman of Hispanic descent shoots an unarmed black kid, and white culture is to blame? That seemed to be the argument in Michael Skolnik’s opportunistic, perversely reasoned, poorly written viral column about the death of Florida teen Trayvon Martin. Then CNN and MSNBC happily picked up the thread and sped the argument forthwith to Crazyland.

Now that Trayvon Martin had their attention, The DC quickly distilled the voice of Trayvon Martin’s millions of supporters: the dozens-strong New Black Panther Party. The next day, they ran a story that implied that President Obama commented on Trayvon Martin’s killing because of pressure from that same group, but have since thought better of it, apparently, editing the piece to make it less race-baitey.

Here are some of the headlines from the 45 articles The Daily Caller has aggregated under their Trayvon Martin tag. You can see them all for yourself, but these are pretty well representative:

* After days of tension, all quiet in Sanford on Saturday

* Is momentum in Trayvon Martin case swinging toward George Zimmerman?

* Kurtz: MSNBC should crack down on Sharpton’s activism, not allow him to organize political rallies

* Police: Zimmerman says Trayvon decked him with one blow, then began hammering his head

* Ron Paul on Trayvon Martin Case: Not ‘going to be a slam dunk’

As you can see, The Daily Caller was very thorough when it comes to covering Al Sharpton riling up black people, or Jesse Jackson showing up late, or President Obama being a bad, bad man, or George Zimmerman telling his side of the story and gaining “momentum.” They were so thorough that they even managed to work communists and Father Pfleger(!!!) into their coverage, and obtain the expert legal opinion of Rep. Ron Paul (R-TX). They’ve also been very thorough about conducting an internet grave-robbing, posting two rounds of tweets from the slain teenager’s closed Twitter accounts.

So, what’s missing from those 45 Trayvon Martin articles? Well, there’s not a single headline devoted to Trayvon Martin’s parents, or to his attorney Benjamin Crump, or to Trayvon’s girlfriend, the only living witness to the first contact between Trayvon and Zimmerman. But they got Father Pfleger. They got the communists. They got Al Sharpton and Jesse Jackson and President Obama but good, with over a quarter of their Trayvon articles.

George Zimmerman deserves his day in court, which is what all of these protests have been about. Hopefully, if and when he gets it, that court is a little more thorough than The Daily Caller was, or the only person in danger of going to jail will be Al Sharpton.