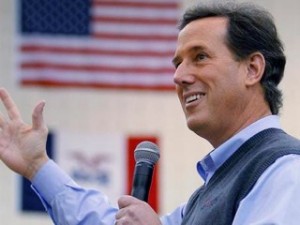 Markos Moulitsas, Daily Kos founder, is launching an initiative aimed to make the Republican primary even longer and, in the process, give Democrats a boost. Calling it “Operation Hilarity,” Daily Kos is urging Democrats to vote for Rick Santorum in states that have open primaries and caucuses. Why? Because, among other reasons, “it’s freaking hilarious.”

I mean, Rick Santorum? Really? The Republicans have offered up this big, slow, juicy softball. Let’s have fun whacking the heck out of it.

More seriously, the Daily Kos states the longer the Republican primary race goes on, the better the odds are for “Team Blue.” Especially since Barack Obama’s prospects have been looking up in the polls. Furthermore, Republican voter turnout has been getting worse, and the margins of victory are razor thin. Meaning, “it won’t take many of us to swing contests the way we want them to swing.”

The Daily Kos post contends that the longer this race goes on, the more unappealing the “Republican presidential pretenders” become:

Rick Santorum will inevitably follow the same path once he gets properly vetted. Mitt Romney has been unable to stem the bleeding despite his tens of millions. Just imagine Santorum, with the far more radical record and a continued inability to raise real money.

In the next few weeks, Michigan, North Dakota, Tennessee and Vermont will have open primaries/caucuses. For everyone else, there’s the option to donate $5 to their Facebook advertising campaign.