Dan Savage Apologizes For His Comments About Christianity

Dan Savage Apologizes For His Comments About Christianity 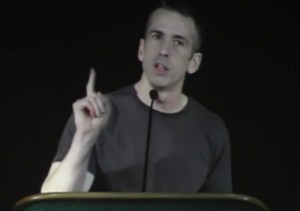 On Sunday, Dan Savage took to his blog to apologize for some controversial comments he made at an anti-bullying event. Savage said he shouldn’t have used the term “pansy-ass” and noted that he was not attacking Christianity, but rather, he was attacking hypocrisy.

RELATED: Dan Savage At Anti-Bullying Event: ‘We Can Learn To Ignore The Bullsh*t In The Bible About Gay People’

Savage has faced some backlash after a California high school teacher had some students walk out of the event he was giving a speech at. He had said:

Other remarks from Savage included:

In his post, Savage said, “I would like to apologize for describing that walk out as a pansy-assed move. I wasn’t calling the handful of students who left pansies (2800+ students, most of them Christian, stayed and listened), just the walk-out itself.” But, he added, “that’s a distinction without a difference.” It was “name-calling” and “wrong,” Savage said, “and I apologize for saying it.”

Regarding his comments about Christianity, he said (emphasis his):

I didn’t call anyone’s religion bullshit. I did say that there is bullshit—”untrue words or ideas”—in the Bible. That is being spun as an attack on Christianity. Which is bullshhh… which is untrue. I was not attacking the faith in which I was raised. I was attacking the argument that gay people must be discriminated against—and anti-bullying programs that address anti-gay bullying should be blocked (or exceptions should be made for bullying “motivated by faith”)—because it says right there in the Bible that being gay is wrong. Yet the same people who make that claim choose to ignore what the Bible has to say about a great deal else. I did not attack Christianity. I attacked hypocrisy. My remarks can only be read as an attack on all Christians if you believe that all Christians are hypocrites. Which I don’t believe.