David Sirota Blasts ‘Cowardly’ The Five For Trashing Him In Absentia 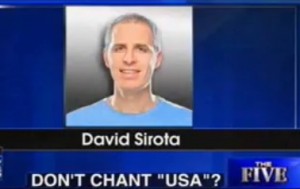 Sirota blasted back on Twitter, calling the show’s quintet of hosts “cowardly” for not inviting him on to debate the issue:

Apparently my @Salon piece was the subject of a screed on@FNTheFive. How cowardly – but typical – of @FoxNews to not invite me on to debate

Here’s the Five clip he was referring to:

A good deal of the criticism leveled at Sirota was warranted, particularly his presumption to speak for all liberals. His piece was sub-headlined “It’s liberal Americans’ Olympic dilemma: How do they root for their countrymen without being jingoistic?”

The Olympics actually don’t present a dilemma, at all, to most liberals, or at least, to this liberal. Yes, it can be annoying when people start chanting “USA! USA!” in settings other than international competition, or the shooting in the eye and jettisoning as chum of Osama bin Laden, but apparently, people do this from time to time. They’ll get amped at a football game, or a NASCAR race, and start the chant, which makes about as much sense as chanting “Earth! Earth!”

It’s a free country, though, and as long as you’re not, say, chanting it at a rival basketball team that’s predominantly Hispanic-American, or lunkheadedly using it to shout down a protester, I say chant away.

Using the chant at the Olympics, though, is the most natural thing in the world, and that’s the criticism The Five really missed, that Sirota acknowledges as much in the 97th paragraph of his “Don’t chant USA!” post:

Noting all of this isn’t to pretend I’ll be rooting for some other nation. A boy can mature beyond his infantile displays of hyper-patriotism, but the sense of American solidarity will always remain. That means in every individual contest I watch, I’ll almost certainly be pulling for the red-white-and-blue (and probably with the occasional “USA!” outburst).

I guess his point is that if you’re going to chant, do it thoughtfully? Or only occasionally?

What I do object to is Eric Bolling‘s declaration that “It feels like when you hear something ridiculous like that, it comes out of a liberal mouth,” disproven moments later by Andrea Tantaros, who revealed the narrow definition of patriotism that liberals resist by saying, “This is what is taught in liberal universities across the country. Multiculturalism.”

Got that? Patriotism and multiculturalism are mutually exclusive.

Sirota’s mistake, and that of (the tiny number of) other liberals like him, is in ceding patriotism to others. We don’t need to hear your life story every time you say you love your country, and if there’s any truth to the liberal idea that it’s possible to love your country while being mindful of its flaws, then we shouldn’t hesitate when expressing that love.

His “coward” designation of The Five isn’t entirely fair, either. It’s not a prerequisite of criticism that you present the individual being criticized. Now that he has challenged them, however, he might just secure that invite from The Five, or Greg Gutfeld’s insomniac klatch Red Eye, which would be worth staying up for.