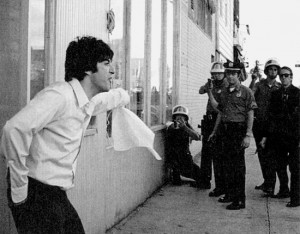 It wasn’t clear that New York City would survive the 1970s.

I mean, physically it would, of course – it wasn’t going to sink, grimy and graffiti-ridden, into New York Harbor. But in late 1975, the city was broke. The budget deficit, reported at $600 million, was in reality nearly four times higher – and the city held $14 billion in debt. In October, President Ford basically told New York to fuck itself; that the city would not be bailed out by the government. (Today, of course, they would only do that to everything north of Canal Street.)

In post-Watergate America, confidence in institutions had evaporated. In the city, people were skeptical that a trustworthy institution had ever existed. The government was lying and inept, the subways were a mess. And the cops? Fuck the cops. This was two years after Serpico, man.

It was the year of Dog Day Afternoon.

The movie, that is, not the events depicted in it. The events – the robbery of a bank branch in Brooklyn, a 14-hour stand-off with the cops, and an eventual trip to JFK to board a plane to Algeria – happened on a hot August day in 1972. The film opened one month before Gerald Ford cut the city adrift.

If you haven’t seen it recently (or, God forbid, haven’t seen it), it opens with shots of the city – sanitation workers toss some of the street’s garbage into the back of a truck, a plane flies above a toll booth on the Triborough, you get your standard shallow-focus shot looking down one of the avenues. We end up over Prospect Park, and then are looking at a branch of non-existent First Savings Bank of Brooklyn.

The bank robbers, played by Al Pacino and John Cazale (you’d recognize him as Fredo), enter and are running through the standard not-those-marked-bills-these-ones exposition when the phone rings. “It’s for you,” the bank manager tells Pacino’s Sonny. It’s the cops.

Which is how it happened, more or less. Pacino plays a character based on John Wojtowicz who, in August 1972, held up a Chase Manhattan branch in Brooklyn with his 18 year-old friend Sal Naturile. It was a one-big-score-and-then-we’re-set scenario; Wojtowicz saw the heist as the silver bullet for what was wrong in his life. Unemployment, taking care of his kids. He just needed some money.

Sonny knows what’s happening outside. He’s watching himself on TV, watching their coverage. But he’s also been out there to talk to the police negotiator. He’s seen the crowds, seen the press – and seen the scores of cops pointing their weapons at him. There are cops in helicopters, on rooftops, on fire escapes, in windows, on the street, crouched behind cars. Cops ready – eager – to move in. “They wanna kill me so bad they can taste it!”

Even if they didn’t – which, probably they did – it’s clear why Sonny would assume that. The year prior, a thousand prisoners rioted at the Attica Correctional Facility in upstate New York. The group, nearly half of the prison’s two thousand-plus inmates, seized the facility and took several guards and civilians hostage. Negotiations dragged on for days during which time prisoners gave interviews to TV reporters. The state issued a final offer, excluding amnesty for the riot. The prisoners rejected it.

Governor Rockefeller sent in state police; television cameras filmed their preparations. Cops dropped tear gas and swarmed the yard with shotguns. Nearly three dozen prisoners were killed, as were a number of correctional officers and civilians. Blame for the outcome fell squarely on the authorities, not without justification – but it was perhaps inevitable. It was 1971, after all.

Eleven months later, Wojtowicz walked out of that Chase Manhattan and saw all those cops.

TV NEWSMAN: But I mean, why do you need to steal? Couldn’t you get a job?
SONNY: Get a job doing what? You gotta be a member of a union, no union card – no job. To join the union, you gotta get the job, but you don’t get the job without the card.
TV NEWSMAN: What about, ah, non-union occupations?
SONNY: Like what? Bank teller? What do they get paid… they pay one hundred thirty-five dollars and thirty-seven cents to start. I got a wife and kids. I can’t live on that — You want to live on that? What do you make a week?
TV NEWSMAN: I’m here to talk to you, Sonny, not…
SONNY: Wait a minute … I’m talkin’ to you. I’m askin’ you a question…
TV NEWSMAN: The audience is interested in you, Sonny … not me.
SONNY: Yeah! We’re hot entertainment, right? You got me and Sal on TV… we’re entertainment you sell, right?

And the cops weren’t going to shoot someone on live TV.

The situation in Brooklyn offered other advantages over the prison in Attica. First of all, it was in the middle of New York City. Within minutes of the police barricading the street, crowds formed, clearly willing to be swayed by either side in the struggle between cop and crook. Second, with Sal inside watching the hostages, Wojtowicz could come out onto the street, talking to the crowd directly.

The third – and biggest – advantage Wojtowicz had over Attica was Attica itself. With one word, three syllables, he could shift the crowd’s demeanor toward the scores of cops aiming weapons at the bank. For any who still saw them as public servants hoping to arrest armed hostage-takers without injuries, they could just as easily represent those whose shotguns crushed the Attica revolt. With one word, Wojtowicz wasn’t a bank robber – he became a tiny virus of insurrection, a man who had stepped outside of the failed state to find his own anarchic course, a man who the state wanted to kill so badly they could taste his blood.

“Attica!,” Sonny yells. “Attica!” This is the most famous line from the movie, and it wasn’t scripted. It’s something Wojtowicz actually said.

But sympathy isn’t loyalty. Crowds are fickle. Wojtowicz had another motive – his primary motive – for stealing that money. Not to support his kids and ex-wife, but for a medical procedure for his current wife – a transsexual named Ernest Aron. And Aron wanted a sex change.

Wojtowicz and Aron had been married in Greenwich Village the previous December. Life described the nuptials:

The wedding couple sent formal invitations to over 300 guests, set out a lavish buffet, arranged for a photographer, and even allowed the proceedings to be videotaped. Wojtowicz’s mother came. So did Aron’s father.

1971. The marriage, perhaps understandably, wasn’t easy. Aron was brought to the scene from his room at King’s County Hospital where he’d been hospitalized for attempting suicide after a fight with Wojtowicz. He stepped out of a police car, bushy, unkempt hair, wrapped in his hospital gown.

The media and crowd gulped the scenario down, choking on it from eagerness. Wojtowicz, a chameleon, had shifted appearance from crook to antihero to queer against these different backdrops as the sun started to set. The audience’s interest in rooting for victory faded. It was there to watch the world burn. Fuck the cops, fuck the criminals, send in the tear gas. Attica!

At 3 am, Wojtowicz and Sal got into an airport limousine with their hostages, a hermit crab trading shells. Wojtowicz sat in the back; Sal, surrounded by hostages, got into the middle row. An FBI agent took the wheel. Two dozen cars containing boisterous members of the crowd trailed the police procession to JFK.

The movie gets the ending basically right, though they put Sonny in the front seat for aesthetic reasons. At the airport, as the group was about to get food, Sal was shot in the chest and killed by the driver. Wojtowicz was disarmed and arrested; he served twenty years. The state crushed another infection, away from the cameras.

Until Dog Day Afternoon. Between the robbery in 1972 and the movie in 1975, the city continued its decline, reaching that point in October when, with the movie still in theaters, Ford turned his back. Institutions telling institutions to fuck off. Burn it all down.

Look. This is the moment now, right? America’s stumbling, Washington is being sworn at on Twitter, everyone has been out of work forever. The president has thrown up his hands. No one is standing outside Morgan Stanley cheering on the criminals that step outside, but the moment feels familiar. Feels like America is just going to sag into both oceans until we’re all crowded on top of the Rockies.

Well, spoiler: New York is a phoenix. Governor Hugh Carey, who died this weekend, helped avoid bankruptcy for the city and state in 1975, and built a path for his successor, Mario Cuomo. In 1979, the year Cuomo took office, the lights went out and the Bronx burned, but the city could pay its cops. Hell, New York survived Giuliani.

And here we are. We’re broke, but Governor Andrew Cuomo signed gay marriage into law. He’s closing prisons – people hardly even rob banks anymore, at least by walking in with a gun. It’s sweltering hot outside and we can watch Dog Day Afternoon on Netflix Streaming.