Democrats Resurrect Confederacy to Refight Civil War in Their Own Minds

Democrats Resurrect Confederacy to Refight Civil War in Their Own Minds 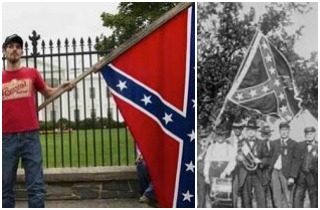 In 2013, North Korea conducted its third test of a nuclear weapon, Pope Benedict became the first pontiff to resign since 1415, Croatia became the 28th member of the European Union, and Democrats resurrected the Confederate States of America.

It was a battle fought in tens of places; from the pages of The Daily Beast, to the studios of MSNBC, to even the halls of Congress. Democratic legislators and their ideological allies determined that attacking Republicans on the substance of their ideas was simply not enough. Some embraced the politically expedient tactic of suggesting, or outright insisting, that their Republican opponents were not legitimate governmental actors. They were insurrectionists, saboteurs, and — perhaps most damningly — racists.

Thus, a campaign was waged to create the impression that Southern rebelliousness had been reborn in the very party that prosecuted a war to rid the world of this ideology. The campaign started slowly at first – years ago, in the far corners of the liberal blogosphere. But it gradually picked up steam and trickled into venues where reasonable and civil discourse had once been valued above almost all else.

Among the first mainstream commentators to assail the newly revived Confederacy was MSNBC commentator Chris Matthews. In 2009, recognizing the surge of support for Republicans that would eventually result in the transfer of control of the House of Representatives to his political opponents, Matthews dubbed the Obama-era GOP the new “Party of the Confederacy.” His logic? In part, the GOP had nearly completed the political transformation of the Deep South from solidly Democratic into a virtually impregnable Republican stronghold. But also, the target of the Republicans’ disapproval was the Democratic President of the United States – an African-American.

Matthews would not be the last to link the Republican Party to the revived Confederacy. A variety of issues provided American liberals with an opportunity to link the GOP to the Confederacy, though they were not especially convincing. In August, MSNBC contributor and frequent guest host Joy-Ann Reid identified a strain of “neo-Confederate” thought that she said could be identified in every supporter of the Second Amendment right to gun ownership.

“The tea party is the resurrection of the Confederacy,” Rev. Jesse Jackson told POLITICO that summer. “It’s the Fort Sumter tea party.” Jackson’s basis for this charge was the fact that Republicans continue to oppose the ideas and projects of President Barack Obama – a black man. At the time, MSNBC’s Ed Schultz asked his viewers if they agreed with Jackson. “The response was a resounding ‘yes,’” he noted.

But as the summer of 2013 faded away and a warm and wet autumn dawned in Washington D.C., and the implementation of the Affordable Care Act accelerated, Republicans forced a government shutdown in what many saw as an ill-fated final effort to delay the law. They would fail.

But in the process, many Democrats became utterly convinced that the evils of the Confederacy were again being visited upon Americans.

Jackson had many supporters but they kept silent at first, awaiting more evidence to confirm their conviction – that Republicans were, in fact, revolutionary and racist – to materialize. They would not have to wait long.

On the second weekend of the government shutdown, a conservative protest took place in front of the White House. Through the fog of that grey day emerged the unmistakable symbol of the Confederacy – the battle flag flown by Generals Lee, Jackson and Beauregard. One man, misguidedly embracing that dubious symbol unfurled in anger for the last time nearly 150 years ago, had provided Democrats with the evidence they needed to confirm their worst suspicions. The floodgates were opened.

“Ghosts of the Confederacy out in force as fringe rules GOP,” declared The Daily Beast’s Eleanor Clift.

“You reap what you sow, and Republicans are paying the price for elevating a minority within their party,” she continued. “The standoff coming to a head feels like an existential struggle, and that’s an invitation to the most aggrieved fringe of the GOP to come out in full force.”

Quoting a variety of Democratic sources, Clift confirms that that the Republicans have embraced the insurrectionists within their ranks. “Embracing the confederacy is bad history and bad politics,” one California university professor helpfully reminded Clift’s readers.

“That’s obviously going to undercut what they’re saying,” POLITICO’s Mike Allen observed of the lone protester’s ability to capture the media’s attention and, thus, detract from the Republican messaging. “And does reflect badly, even though there’s no reason it should.”

Some even heard the yips of the rebel yell echoing through history, bouncing faintly along the marbled walls of the Capitol Building. “This is all about a handful of people who got elected as Republicans that want to bring down our government,” insisted Congressman Charlie Rangel, a New York Democrat serving in Congress since 1971.

“The same way they fought as Confederates, they want to bring down the government and reform it,” he added. “Well, I can tell you this, if you look at the states that they control, take a look at the Dixiecrats, see how they went over to the Republican Party.”

These are statements of faith, but the congregants who subscribe to this belief structure are numerous. Some would argue that it is theirs – a devotion to an ideal that delegitimizes their opponents and renders the internalization of their ideas and arguments unnecessary – that is the truly dangerous ideology.

Others would say that this effort on the part of Democrats is part of an elaborate effort to repent for past sins. The Republican Party having been historically the party of emancipation, suffragism, and civil rights.

But these are questions to be resolved another day. Today, the battle is again joined in the minds of many Democrats as they seek to relive the glorious and horrible War Between the States.