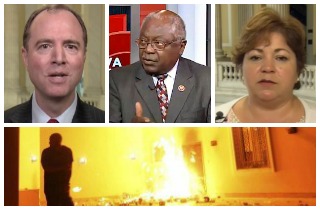 Republicans are walking on eggshells. The press is closely watching how they comport themselves heading into an investigation into the Benghazi attacks. Many in the media have warned Republicans not to “overreach.” Even those that do not regard the formation of a select committee as an expressly political exercise unconvinced the administration has anything left to disclose about the Benghazi attack and its aftermath.

The same well-meaning advice has not, however, been offered to Democrats who appear to be engaged in a competition to see who will approach the investigation in the most churlish manner possible.

The Democratic base, teased for weeks with the idea that their representatives in Congress may boycott the committee or even appoint only the partisan wrecking ball Rep. Alan Grayson (D-FL) in protest, was crushed on Wednesday when the party’s leaders announced their intention to participate fully in the investigation.

Shortly after this announcement, Democrats appeared in a variety of friendly venues in what amounts to an apology tour.

Joining MSNBC’s Rachel Maddow, Rep. Adam Schiff (D-CA) insisted that Republicans are simply trying to “provoke a fight with the administration.” Calling the process a “sham” and a “colossal waste of time,” Schiff insisted that he and his fellow Democrats on the committee are only there to “scream bloody murder” about the GOP.

In an appearance on Roland Martin’s NewsOne Now, Rep. James Clyburn (D-SC) equated the formation of the Benghazi committee to the collapse of Reconstruction and the rise of Jim Crow laws. “If I didn’t know the history of this country so well, I might not be as concerned as I am,” Clyburn sorrowfully warned.

None of this was good enough for MSNBC’s Joy Reid. In an segment on her network on Thursday, committee member Rep. Linda Sánchez was berated for legitimizing the proceedings, emboldening Republicans, and giving the opposition cover to call the investigation a bipartisan one.

In each media appearance, Democrats patiently explained to their incredulous inquisitors that they had no choice but to participate in the committee in order to pursue a political outcome: the protection of their members, the president, and the members of his administration.

“Hillary Clinton’s world was so worried about a Republican investigation of the Benghazi attacks, they sent a message to House Democrats: We need backup,” a thoroughly reported story in Politico on Thursday began. If that’s not a political exercise…

It’s inexplicable that the political press, which is so deeply concerned about the potential for Republicans to alienate persuadable voters, cannot see that Democrats are behaving in a fashion that is about as political as possible.

Last week, I asked if Democrats are aware that there are pitfalls associated with the Benghazi probe for them as well as Republicans. Namely, that if this committee does uncover new information relating to the Benghazi attacks – information along the same lines as that which emerged after a FIOA request in April – it will be Democrats who could be seen as the party playing political games.

But that presupposes that the media will be inclined to call Democrats out on their competition see who will undermine the investigation the most. With the liberal press apparently cheering on the Democratic Party’s campaign of base mollification, don’t hold your breath.