Despite Accusations of Being Right-Wing, House of Cards Earning Rare Bipartisan Love 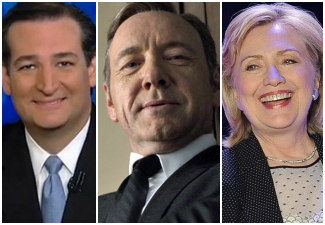 A word heard often in the world of media and especially cable news is agenda. Newsbusters, for example, makes a living out of pointing out daily examples of a liberal agenda at MSNBC and (to a lesser extent) CNN. Media Matters serves up the same meal to its readers in regards to Fox and a conservative agenda, and even goes so far to move into activist territory (with no success) with petitions like this one.

The existence of partisan media outlets and playing to the crowd to help validate the steadfast beliefs of its readers on a daily basis isn’t exactly breaking news. But here’s a growing trend worth noting: The accusations of bias in the world of entertainment where it doesn’t exist. We saw that recently with Selma and American Sniper leading up to the Oscar’s, with the former being somehow “snubbed” despite being nominated for Best Picture (because the Academy is old and white and racist and stuff…12 Years a Slave winning the previous year notwithstanding) and the latter being snubbed by not winning the award outright because of Hollywood not embracing the military as much as it should (despite films like Hurt Locker winning in the not-so-distant past and nominations to Saving Private Ryan (correction) and Zero Dark Thirty).

As we’ve seen and continue to see, almost all TV shows about Washington feature noble Democrats caring more and being deeper thinkers than their eeeeeviiil Republican counterparts. The West Wing was the best example (exceptionally articulate liberal geniuses winning policy battles over myopic, crusty conservatives). In the present, Scandal makes no apologies for being anti-GOP, nor did The Newsroom (Sorkin again). Madam Secretary might as well change Tea Leoni‘s character’s name to Hillary. It’s Hollywood, it’s liberal. It is what it is. Deal with it. But…those programs did/do lose more than a few viewers when blatantly taking a side. The same can’t be said about House of Cards, which can’t be bothered with making political statements with so many more compelling things going on.

So you can understand why it is so patently hilarious to read about accusations of bias when it comes to the best show to come onto our radar since The Sopranos in the form of the Netflix smash hit. And in a twist of irony, the bias accusations aren’t coming from conservatives because the lead character–the great Kevin Spacey‘s Frank Underwood–is a Democrat everyone roots for, but from progressive outlets who feel the show is decidedly right-wing (more on that in a moment).

Before we continue, know this: Cards is the phenomenon it is not because of any Republican or Democratic messaging, or some kind of subtle undercurrent pushing a particular political agenda. What makes the series addictive for so many (more than five million people have viewed the official Season 3 trailer alone) are four things: The acting (Spacey elevates the entire cast to its A+ game, particularly Robin Wright‘s Claire Underwood), the unpredictability (I didn’t see that train scene coming in Season 2, either) and the ruthlessness (those with something called emotion are doomed). But most of all, the writing–custom-made for Spacey the way the late Harold Ramis teed up Bill Murray in Stripes, Caddyshack, Ghostbusters and Groundhog Day–is absolutely tremendous. That said here’s your top 10 quotes from the Spacey’s Underwood:

“Money is the Mc-mansion in Sarasota that starts falling apart after ten years. Power is the old stone building thast stands for centuries. I cannot respect someone who doesn’t see the difference.”

“The road to power is paved with hypocrisy, and casualties.”

“The nature of promises, Linda, is that they remain immune to changing circumstances.”

“I’ve always loathed the necessity of sleep. Like death, it puts even the most powerful men on their backs.”

“A great man once said, everything is about sex. Except sex. Sex is about power.”

“I never make such big decisions so long after sunset and so far from dawn.”

“The best thing about human beings is that they stack so neatly.”

Like Tony Soprano, we all love Frank Underwood because–while he’s constantly scheming and lying–he’s still honest in his convictions and realistic about the soulless world around him. And this is why millions binged on House of Cards this weekend: Not for the political or ideological aspects of the show–which merely serve background noise and therefore are completely inconsequential to the meat of the show–but for its real premise: The pursuit of power above all else…including things like love and loyalty.

But because everything always goes back to hidden agendas these days, this still isn’t stopping these kind of headlines since the series began:

Huffington Post: House of Cards is a Republican Fantasy World

Salon: Why was Francis Underwood a Democrat? (the title should be “is” instead of “was” considering Underwood is still very much alive on the series)

For those who don’t watch the show, Spacey’s Frank Underwood is indeed a Democrat, albeit one from South Carolina in the spirit of the old Blue Dog model. And yes, he does push to privatize social security to fund a job creation program, and in previous chapters has advocated raising the retirement age to 68. In Season 1, the teachers union is an Underwood target for major concessions (not because union-busting is something Frank actually cares about, but because it will get him closer to the president and eventually the vice presidency). Again, these policy plotlines are completely inconsequential, as the premise is always about Frank–in the spirit of Littlefinger’s speech on gaining power to Varys in Game of Thrones—creating chaos not as a pit, but as a ladder to bigger things. It’s not like Frank has any real principles or actual ambition to make the country a better place. Instead, Cards is all about obtaining power and holding onto it.

So is House of Cards a turnoff to members of either political party? Doesn’t appear that way: Ted Cruz (R-TX) declared to TMZ before the weekend he plans on binge-watching the show. Hillary loves the show, as does the president (who once marveled at Underwood’s ruthless efficiency in getting things done). House Majority Leader Kevin McCarthy (R-CA) was the first amateur actor to appear on the show (Season 2) after befriending Spacey a year earlier. He apparently has made quoting Underwood a hobby when on the Hill.

Yes, it exists…only on Netflix. The agenda: Entertaining the masses through exceptional acting, writing and production.