Did a Fox and Friends Segment on Boeing Outsourcing Jobs Inspire Trump’s Air Force One Tweet? 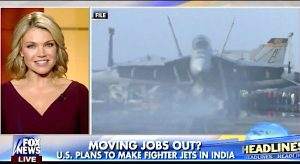 Late last month, it was speculated that President-elect Donald Trump may have been inspired by a Fox & Friends segment to tweet out about how burning the American flag should lead to loss of citizenship and/or prison time. His tweet came out shortly after Fox News ran a story about a flag being burned at Hampshire College following Trump’s election victory.

Is it possible that today’s big news cycle setting tweet about Boeing and Air Force One was also brought about by Fox & Friends?

In case you missed it, Trump tweeted out this morning that Boeing was charging $4 billion for the new Air Force One project and wanted the order canceled. The tweet was sent out at 8:52 AM ET. (For its part, Boeing has stated that their contract is currently for $170 million and the entire cost of the project to the government thru 2021 is estimated at $2.9 billion.)

Boeing is building a brand new 747 Air Force One for future presidents, but costs are out of control, more than $4 billion. Cancel order!

Considering that this project wasn’t something that had been widely reported, some tried to figure out where this all came from and what prompted Trump to rail about Boeing. Talking Point Memo’s Josh Marshall felt that it Trump could have been reacting to a story in the Chicago Tribune that had come out about 20 minuted beforehand about Boeing’s worry over Trump’s trade polices.

And this is a pretty good theory. It fits in with Trump’s past behavior and, in particular, Marshall’s belief that Trump practices dominance politics in which everything is based on loss and revenge. Basically, Boeing is going against Trump, however slightly, so Trump needs to enact revenge on Boeing.

However, what if is something much simpler this time around — like he saw something on Fox News that presented Boeing as the bad guy by outsourcing jobs while simultaneously showing him as the Carrier job-saving hero?

See the clip below, via Fox News

The short news blurb references a story in the Washington Post yesterday which details how both Lockheed Martin and Boeing are looking at building fighter jets in India. Now, going further into the actual story, it shows that India is looking to replace its aging fleet of mostly Russian-built planes. Also, it doesn’t appear that any American jobs will be lost.

This short segment played on Fox News roughly two hours before Trump’s tweet, and it only ran for less than a minute. At the same time, we know Trump watches Fox News a lot, especially their morning staple. Could seeing a bit in which they showed Boeing as an outsourcing villain days after Trump saved manufacturing jobs have set him off to publicly humiliate the plane manufacturer? Especially if it burnishes his reputation with voters as a populist champion?

We report. You decide.