Did Bristol Palin Just Call Out Her Mom For Being Part Of “Lame Stream” Media? Update. 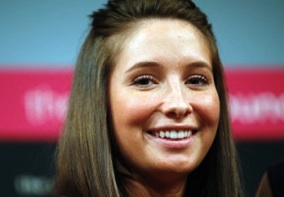 Here’s what appears to be an editorial from former Dancing With the Stars finalist Bristol Palin in less than 140 characters: Former Alaska Governor Sarah Palin‘s eldest daughter took to Twitter to write a rather surprising critique of her famous mom:

You are a paid member of the “lame stream media” you’re always referring to, mom. Fire all of your ghost writers and tweet for yourself :(

That frowny face cuts like a mothereffing knife, Bristol.

Update: the updates to Bristol Palin’s Facebook page appear to come from an iPhone platform, and this Twitter feeds appear to be updated via Android, suggesting that that this is a fake Twitter account (unless she got a new Android phone for Christmas.)

There is definitely the possibility that Bristol’s feed was somehow hacked (which, given the mostly critical media attention the elder Palin is contending with right now, isn’t all that unlikely.) There is also a decent chance that this is not, in fact Bristol Palin’s account (though her previous tweets appear to support the fact that it is in fact hers — though at this point this is unconfirmed.)

So if in fact this Twitter feed does belong to Bristol, the statement can be read as either an impassioned plea for her mother to practice what she preaches and resist succumbing to hypocrisy, or a rather naïve Tweet by a young person unaware of the fact that her mom kind of sort of already has a lot on her plate right now without having to deal with public criticism on the part of her daughter.

If this is a fake Twitter account, then the individual behind it is brilliant for developing a rather ingenious “long con.”

Sarah Palin’s own Twitter account has been quiet in the wake of this weekend’s shooting in Tucson, Arizona save for a link to her official Facebook page, on which the former Governor issued an open letter of condolence to the victims. 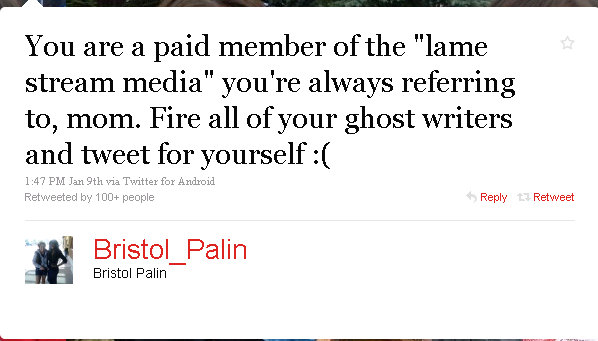