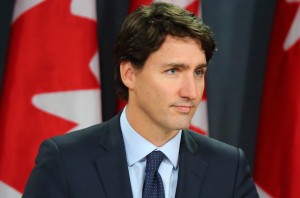 Canadian Prime Minister Justin Trudeau is getting a lot of online heat over his response to the death of former Cuban leader, Fidel Castro.

Trudeau was among the many world leaders who released statements today to acknowledge Castro’s passing. However, Trudeau’s statement seemed oddly complimentary compared to others.

“While a controversial figure, both Mr. Castro’s supporters and detractors recognized his tremendous dedication and love for the Cuban people who had a deep and lasting affection for “el Comandante”.

“I know my father was very proud to call him a friend and I had the opportunity to meet Fidel when my father passed away. It was also a real honour to meet his three sons and his brother President Raúl Castro during my recent visit to Cuba.

“On behalf of all Canadians, Sophie and I offer our deepest condolences to the family, friends and many, many supporters of Mr. Castro. We join the people of Cuba today in mourning the loss of this remarkable leader.”

After it was released, Trudeau’s statement took on criticism for not doing enough to condemn Castro’s human rights abuses and dictatorial rule. The subject became a source of online conversation, and people did not hold back in expressing their opinions:

I just got around to reading PM Trudeau's statement, and I'm suddenly a lot less embarrassed about my country electing Trump.

Disgraceful statement from Justin Trudeau re Castro. No, Justin, Fidel didn't "serve" Cuban people. He made them serve him. For 60 years. https://t.co/E413zutMwS

No @JustinTrudeau, Castro was not a 'legendary revolutionary', he impoverished millions while he lived in luxury

These slams eventually took the shape of #TrudeauEulogies, where Twitter users imagined Trudeau excusing the egregious behavior of various historical figures and characters:

Nero soaked Christians in oil and set them ablaze. But he also limited the need for lights and kept the religious warm. #TrudeauEulogies

We mourn the loss of Judas Iscariot. Remember his ambition & business acumen. Nothing got in his way. Not even friends. #TrudeauEulogies

Henry VIII: An idealist and a dreamer, no disappointment could deter him from his determined quest for love. #Trudeaueulogies

While a controversial figure, O.J. Simpson taught us the importance of wearing gloves and leaving no witnesses. #trudeaueulogies

#TrudeauEulogies Today we mourn Caligula’s tragically short life; while quirky, he was a champion of horse rights and greater sexual freedom