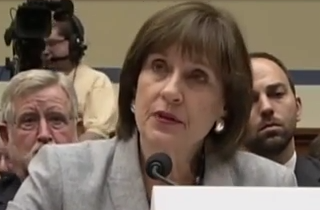 The Department of Justice will not charge former IRS official Lois Lerner for contempt, despite an attempt by members of the House of Representatives to charge her for refusing to testify during a hearing about whether the department unfairly targeted conservative fundraising groups.

Although the House approved a criminal contempt resolution against Lerner last year for invoking her Fifth Amendment right against self-incrimination during a Congressional hearing — a right that then-Oversight Committee chairman Darrell Issa (R-CA) said that she had waived prior to the hearing — Politico reports that Ronald Machen, the former former U.S. Attorney for the District of Columbia, will not file said charges against Lerner.

According to Machen, Lerner, who said that she was innocent in a hearing ten months prior to her citing the Fifth Amendment, was still well within her rights to plead the fifth:

Machen said the Oversight Committee “followed proper procedures” in telling Lerner that it had “rejected her claim of privilege and gave her an adequate opportunity to answer the Committee’s questions.”
IRS watchdog probing ‘potential criminal activity’ in Lerner email mess

However, Machen said Justice Department lawyers determined that Lerner “did not waive her Fifth Amendment right by making an opening statement on May 22, 2013, because she made only a general claims of innocence.”

Machen added: “Given that assessment, we have further concluded that it is not appropriate for a United States Attorney to present the matter to the grand jury for action where, as here, the Constitution prevents the witness from being prosecuted for contempt.”

Lerner’s lawyer welcomed the results, saying that “Anyone who takes a serious and impartial look at this issue would conclude that Ms. Lerner did not waive her Fifth Amendment rights,” and that his client was “pleased to have this matter resolved.”